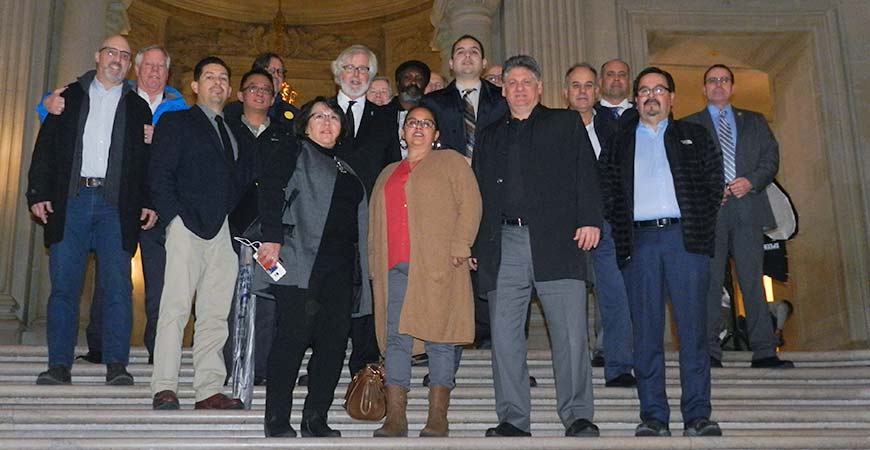 Board of Supervisors Approve New Ordinance After Two Years of Negotiations

The San Francisco Board of Supervisors voted unanimously January 15 to direct City staff to negotiate and finalize a Citywide Project Labor Agreement with the San Francisco Building Trades Council for Public Works or improvement projects. The Board had voted unanimously December 11 to pass a citywide PLA ordinance on its first reading; the second vote came after five new members took office January 8 – all of whom stayed committed to their pledge to back the PLA and voted for the ordinance.

“Any contractor who bids on projects for the Department of Public Works, Parks and Recreation, and other City agencies will have to work under the terms of collective bargaining agreements of various trade unions,” said San Francisco Building Trades Council Secretary-Treasurer Tim Paulson. “That will ensure that workers are paid union wages and qualify for the health care and pension benefits union members receive.”

Initially introduced by then Supervisor Mark Farrell in February 2017, the PLA legislation was amended and revised over the course of almost two years of negotiations between labor and City management, and several Board meetings. Farrell said the goal of his “first-of-its-kind citywide workforce policy” was to guarantee highly skilled labor on City public works projects, increase employment among local residents and veterans, disallow work disruptions and stoppages, and reduce overall public works project costs and delivery. “We need project labor agreements in place on public works projects to increase local employment and decrease public works disruptions,” he said.

The citywide PLA will enable the City to avoid costly delays and additional expenses associated with public works and improvement projects that involve numerous contractors, employees in different trades, have critical timelines for completion, and require a skilled and properly trained workforce to successfully complete the work in a timely manner. Under the PLA policy, all contractors and subcontractors must hire apprentices from State-approved apprenticeship programs and use the “Helmets to Hardhats” program to assist veterans in obtaining employment.

The original proposal called for amending the Administrative Code, “To require a citywide project labor agreement applicable to certain public work or improvement projects with projected costs over $1,000,000 or where delay in completing the project may interrupt or delay services or use of facilities that are important to the City’s essential operations or infrastructure.” The amended legislation raises the threshold for coverage under the PLA. Local Business Enterprises (LBEs) and minority-owned businesses will not be required to work under terms of the PLA unless the total costs of projects they work on reaches $5 million.

The change in the threshold for coverage came after several meetings between Supervisors and the City Administrator to address the concerns of LBEs; mainly that they would be excluded from the PLA and lose work. At the Board’s Government Audit and Oversight Committee hearing June 20, then SFBCTC Secretary-Treasurer Michael Theriault noted the “misinformation and misunderstanding of what a PLA does on the part of the small local contractors,” saying, “We have never believed that a PLA excludes them from work.”

“PLAs have proven to work at the San Francisco Unified School District, San Francisco Public Utilities Commission, and SFO,” SFBCTC president Larry Mazzola, Jr. said. “The PLAs are working the way they are supposed to – including having local contractors and minority-owned businesses – and there’s no reason a citywide PLA wouldn’t work.”

“[The SFBCTC] moved considerably to address the concerns of LBEs, including the threshold – we listened.,” Mazzola said, despite push back coming from LBEs and opponents of the building trades unions. “This is a union town, and we are here to protect workers – union workers and non-union workers – and we’re going to do that.”

Mazzola credited Mayor London Breed as “the one who brought everyone together for a marathon meeting and got an agreement.”

At the Board’s December 11 meeting, Supervisor Ahsha Safaí, a co-sponsor of the legislation, thanked Supervisors Aaron Peskin and Sandra Lee Fewer, and Mayor London Breed their leadership on the issue. “This was certainly not an easy issue to come to consensus on,” he said. Safai remarked that labor’s desire was to expand the opportunities and protections, and highlight the importance of workers in the workplace on City-funded jobs.

“The legislation focuses exclusively for the time being on the Department of Public Works as well as the Recreation and Parks Department,” Safai said. “There are other city-wide project labor agreements and other City agencies. Now all the affected parties will come together over the next nine months to a year and negotiate a final citywide project labor agreement with these parameters. We want to emphasize it was inclusive in terms of negotiations. All the affected parties were at the negotiating table. And again, at the end of the day, this was a hard fought negotiation, but everyone compromised to get where we are – workers, small businesses – to have City-funded projects again be a pathway for all opportunities in these fields.”

District 5 Supervisor Vallie Brown thanked “the people who poured their hearts out and worked on this and came to the table and then built this agreement to benefit workers in the city,” adding that she had been a member of IFPTE Local 21. “I’ve been either union member or supporter of unions throughout most of my adult life,” Brown said. “And I’m proud of San Francisco and this body for standing up with labor when unions are being busted by the Trump Administration all over the country, and I hope to vote to approve this agreement today. The hard-working brothers and sisters in labor deserve it.”

The PLA legislation requires the City Administrator to negotiate with the relevant trade councils, craft and labor unions, and sign a PLA on behalf of the City by September of this year, though the time to reach a deal could be extended until December 1. The PLA would cover construction and remodeling of City buildings including fire and police stations, libraries, hospitals and other infrastructure. Details of the citywide PLA to be negotiated and finalized will cover issues such as the number of core craft workers, percentages of apprentices and local hires, and the composition of any labor-management oversight committee to deal with issues and potential disputes.