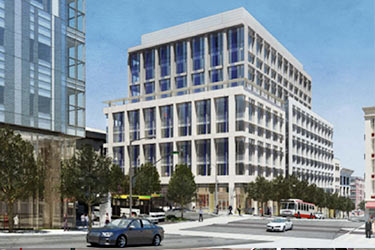 A new Medical Office Building at Van Ness Ave. and Geary Blvd. is nearing completion, and approximately 100 to 200 construction workers are currently employed at the jobsite. - Photo by Paul Burton

The MOB is part of an overall development plan that includes the new 740,000 square foot acute care hospital – the California Pacific Medical Center (CPMC) campus at Van Ness and Geary also nearing completion. The MOB will be connected to Sutter’s new hospital via a pedestrian tunnel below Van Ness Avenue.

Work on the MOB project started in June 2015. Rudolph and Sletten began tenant improvement work in April 2018 – coordinating activities with Pankow as the contractor completes the core and shell. Approximately 100 to 200 construction workers are employed at the jobsite. Major subcontractors for the tenant improvements include Rosendin Electric, Pan Pacific Mechanical, Performance Contracting Inc (PCI) and Olsen Steel. Union subcontractors for the core and shell include Ryan Engineering, Alamillo Rebar, Southland Industries (HVAC and plumbing), Lawson Roofing (waterproofing) and Rosendin Electric. Pankow also is a concrete contractor for the hospital construction. The MOB project is on schedule for completion by March 2019.

The overall CPMC campus project employs hundreds of union construction trades members. The individual projects also employ many San Francisco residents, hired through City Build and union apprenticeship programs. Dustin Komen, project manager for Rudolph and Sletten, said while local hiring is not a requirement for the project, the contractor set a goal of having 30 percent of workers be local hires and 15 percent of contractors be Local Business Enterprises (LBEs). Komen said meeting the goals has been challenging while construction is booming and many other projects compete for local workers, but contractors are making a good faith effort to meet the goals.

The project also requires some special skills and training due to the building’s medical use. Along with doctor’s offices and exam rooms, the MOB will feature several rooms for imaging systems – MRI, CT scanners and Gamma cameras – that require safety measures such as lead-lined walls. Once the rooms are completed, physicists will inspect and certify that they are safe, Komen said. Rudolph and Sletten also conducts ongoing safety testing.

Another unique feature of the TI work is the use of the DIRTT Modular Wall System. DIRTT, an acronym for “doing it right this time” according to the manufacturer based in Calgary, Canada, uses pre-fabricated tiles that are easily and quickly installed on the aluminum frames of interior walls. The panels are also removable and customizable.

According to the online technology news site Justmeans.com, the DIRTT system, “Supports an integrated systems approach, with its many benefits, but it also provides a flexible modular environment that can be easily reconfigured, is drywall-free and can actually be built, in most localities, for less than conventional construction.”

Komen explained that the system, originally used in technology-related buildings is new in the health care industry. While the system benefits building owners and developers by reducing costs and cutting down on construction waste, it also has the potential to reduce or eliminate jobs for drywall installers and finishers, and painters. The project also uses pre-fab mechanical racks that have water and duct systems built into the structural steel frames.

When completed, the Van Ness and Geary Campus will consist of a modern acute care hospital with 274 patient beds, and the medical office building across Van Ness. HerreroBOLDT is the general contractor for the 12-story hospital. It will have 740,000 square feet of diagnostic, treatment and inpatient bed space, and departments for women’s health, children’s health, cardiology, oncology, emergency care and organ transplants. The 253,000 square-foot, nine-story medical office building will accommodate outpatient services and the health care professionals at the CPMC hospital.