Paving a Path for the Next Generation of Builders 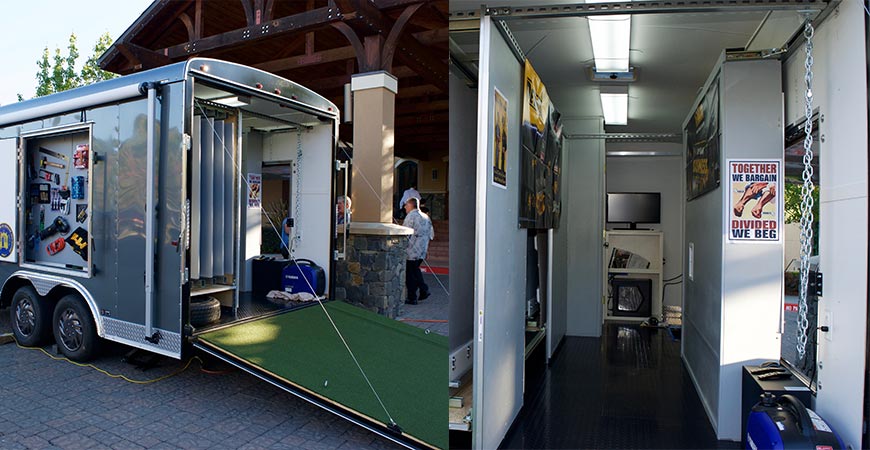 Foundation Twentyone’s trailer (top) will act like an educational experience on wheels intended to spark the interest of students and provide safe exposure to the building trades. Above, the interior of the trailer is stocked with various trade-specific tools and materials that allow for an immersive experience. - Photos by Jacob Bourne

In an effort to come to terms with the loss of their son, John and Karen Christopher established a nonprofit organization in 2008 to help guide youth towards stable careers and bright futures. Foundation Twentyone honors Jonathan C. Christopher, who was just embarking on a career as an elevator constructor before his untimely passing in an automobile accident. The organization strives to instill values of trust, responsibility, commitment, understanding, respect and integrity in young people who are pursuing a life in the building trades.

On September 8, a dinner was held at the Marin Country Club in Novato to celebrate the Foundation’s 10-year anniversary. Guests participated in a raffle of merchandise from local businesses as well as a live auction of baseball memorabilia. The event also included testimonials from speakers, gifts to supporters and music. The building trades had a strong presence at the packed event, particularly members of the I.U.E.C Local 8 Elevator Constructors Union, of which John Christopher has been a member for 40 years.

“Jonathan was a very good baseball player,” John Christopher said of his son. “He was also a devoted friend. Friendship is something that is stressed by the Foundation. There’s a sense of responsibility that comes with it and something we impart to the kids.” 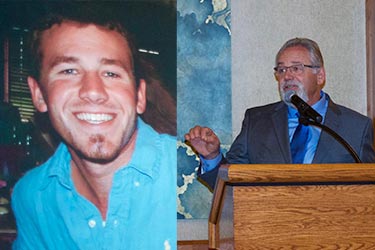 Foundation Twentyone is dedicated to the memory of Jonathan C. Christopher, (left). Jonathan’s father, John Christopher (right), spoke of losing his son and his lasting legacy.

“When I lost Jonathan, I became lost, and it wasn’t until I reached out to my friends that I realized that friendship would be my recovery,” he continued. “I am recovering – look where we’re at today.”

Foundation Twentyone currently awards eight “Friendship Scholarships” to one girl and one boy at Marin Oaks High School, Novato High School, NOVA Education Center and San Marin High School. The recipients are chosen by their peers based on demonstrated moral values and character, attributes that are vital to professions in the building trades.

“I started out in the trade in May 1977 as an apprentice and still work full time and am an apprenticeship instructor,” said John Christopher. “When I’m working on an elevator, I need my righthand man to be someone who’s committed.”

Many of the young people served by the Foundation aren’t initially aware of career paths beyond those gained through a traditional college degree. One of the main functions of the organization is to educate high school students about the wealth of career opportunities in technical fields such as plumbing, electrical work and construction. The Foundation also tackles the erroneous notions about blue collar jobs, that a worker will just be “digging ditches all day” if he joins the trades. Christopher and others at the Foundation challenge these beliefs by showing how the trades have evolved to a new “blue tech” reality, where highly skilled labor is rewarded with competitive pay, health benefits and secure retirement.

Donald Trowbridge, director of outreach at Foundation Twentyone, spoke about joining the organization in 2010 and listening to John Christopher speak about his dream of having a “trades trailer” that could travel around the Bay Area enlightening young people about career alternatives. This year, with assistance from a $15,000 donation, from I.U.E.C Local 8, the trades trailer has become a reality.

“We have so much we want to do in terms of expanding to benefit the community, and the trades trailer is a manifestation of that,” said Trowbridge.

The trades trailer was on display at the annual dinner so attendees could get a preview of the outreach tool before it hits the road in coming months. The trailer is like an educational experience on wheels intended to spark the interest of students and provide safe exposure to building trades for those looking for possibilities outside of college. The exterior of the trailer features a large screen that will undoubtedly show scenes of real job sites as well as educational videos. The interior is stocked with various trade-specific tools and materials that allow for an immersive experience for students who want to know what it would be like to work in the field as well as the steps and training necessary to get there.

The Foundation’s core values will also be tightly integrated into use of the trades trailer with students. Users will learn how to translate the value of friendship into their work and study. The Foundation seeks to convey that something as simple as showing up on time for work, school or to help a coworker in need is a vital skill to have on the job. Trowbridge hopes to hold a Friendship Day in 2019 as a testament not only to the organization’s mission but to John Christopher’s commitment to family, friends and community.

“I think he knows everyone in Novato, maybe even in Marin County or beyond,” Trowbridge said of Christopher. “He gives of his heart. Both he and Karen exemplify what it means to be a friend.”

John Christopher’s roots run deep in the Local 8. Four decades ago when Christopher was starting on his own path in the trade, one of his most influential mentors was Earl McClaskey, father of current Local 8 business manager, Eric McClaskey. Christopher continues a full time schedule today working for KONE, a company that’s “like family” and that showed support in the weeks following his son’s death.

“I knew John before I even got into the trade,” said Eric McClaskey. “He’s always been very involved including as a long-time instructor for the apprenticeship program. When he dives in, it’s full throttle, so it’s not surprising that his Foundation has been a success. We’re proud of our member who has made his own charity from the ground up. He’s a great man with a big heart. We’re lucky to have him.”