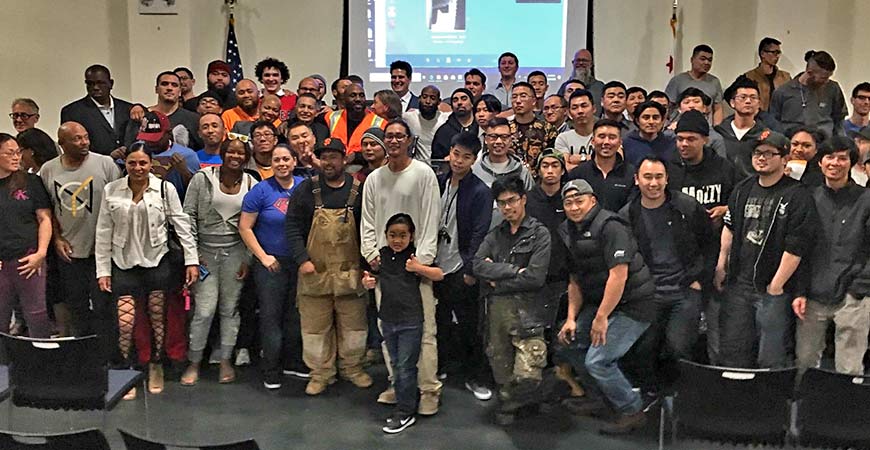 Program Graduates 42, Many With Jobs Lined Up

On October 24, the CityBuild Academy held a graduation ceremony marking the end of an 18-week training cycle. The program has equipped 42 graduates with a solid foundation to work as carpenters, laborers, cement masons, iron workers, painters, tile setters and several other trades. Women made up 20 percent of the graduates and 37 finished the Academy with jobs already lined up.

“For a lot of the grads, they feel that this is the first time they’ve accomplished something and have sustaining jobs lined up that pay $23 per hour on average.”

“We work with each candidate early on in the process to ensure that they get into the program for the trade that they’re aiming for,” said Joshua Arce, director of workforce development at the City’s Office of Economic and Workforce Development and former CityBuild director. “We’re focusing more on the recruitment of women as it’s a priority for us and our labor partners.”

Over a hundred CityBuild alumni attended the graduation held at the Laborer’s 261 Hiring Hall to show support for one of the Academy’s lead instructors, Rafael Palacios who’s been dealing with recent health challenges. Ken Nim, acting director of CityBuild, described Palacios as the “heart and soul” of the program.

“For a lot of the grads, they feel that this is the first time they’ve accomplished something and have sustaining jobs lined up that pay $23 per hour on average,” Nim said.

Board of Supervisors president Malia Cohen, police chief Bill Scott and Tim Paulson, Secretary-Treasurer of the San Francisco Building & Trades Council, spoke at the graduation. Nim, who’s been with CityBuild since its inception 12 years ago, will serve as acting director of the Academy until Mayor London Breed appoints a director in the near future.