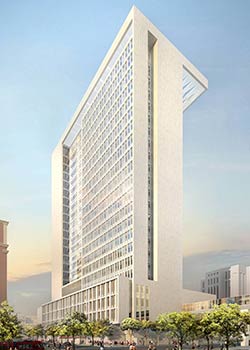 According to the Judicial Council, the new 71-courtroom San Diego Courthouse was severely needed because of serious seismic and security issues. The project showed that the project labor agreement was a success.

Building Trades union representatives turned out in force on September 27 to advocate for project labor agreements for courthouse construction at a meeting of the Judicial Council of California’s Court Facilities Advisory Committee in San Francisco. The Judicial Council of California manages real estate, new court construction, renovations, operations and maintenance for the state. After Judicial Council Facilities Services staff presented information about the implementation of the project labor agreement for the new Central San Diego Courthouse project, representatives from the anti-union Associated Builders and Contractors (ABC) spoke against project labor agreements, followed by several union reps from San Francisco, the North Bay and the State Building and Construction Trades Council (SBCTC).

According to the Judicial Council, the new 71-courtroom San Diego Courthouse was severely needed because of serious seismic and security issues and other significant functional problems in the old downtown courthouse. The new courthouse consolidated the Superior Court, San Diego County criminal, family, probate and civil court departments, and the central court administration into a 23-story building of more than 700,000 square feet. Construction began July 9, 2014 and the court building was turned over to the Judicial Council on November 7, 2017. Punch list work and renovation of the previous Jury Assembly space in the adjacent Hall of Justice was completed on May 30, 2018.

The Judicial Council’s report on the San Diego courthouse project showed that the project labor agreement was a success. The report found that, “A high level of quality work was generally maintained throughout the project. Although sufficient numbers of skilled and motivated workers were provided, complications with the integration of life-safety systems and related inspections created delays in completing construction. Without this PLA, construction delays would have been magnified by shortage of skilled workers.” Additionally, “The PLA took advantage of the trade unions’ on-going training and certification program; including requirements that workers maintain current certifications and skill levels.” A total of 543 apprentices participated in Central Court Building construction, according to the report, as the PLA “provided better qualified personnel for the project…” The project required more than 2.4 million hours of construction labor during 1,476 work days.

“The goals of the PLA were met,” said San Francisco Building Trades Council Secretary-Treasurer Tim Paulson. “Local workers were hired and paid prevailing wages; there were no delays, and no disputes. A PLA is a labor peace agreement that forms a partnership between employers and building trades unions to make sure projects are completed on time and employ skilled apprentices and journeymen. The San Diego PLA was everything you want.” Paulson pointed out that the SFBCTC has PLAs in place with BART, the SF Public Utilities Commission, and the SF Unified School District. “We have the metrics to show who is getting the jobs [under those PLAs],” Paulson said, noting that the numbers belie “the narrative and the scare tactics you heard from the ABC.”

Jeremy Smith of the SBCTC thanked the Judicial Council for “basing your report on facts and figures. The report showed PLAs work for workers. Over 500 apprentices got on-the-job training. The courthouse was completed on time and on budget. The report is typical of numerous studies that provide plenty of evidence that PLAs work.” Countering claims by the ABC that PLAs discriminate against non-union contractors, Smith pointed out that, “anti-PLA contractors choose not to bid on PLA projects.” Indeed, the report included three identical form letters from non-union contractors stating they do not bid on PLA projects and choose not to pay their workers the union benefits required by PLAs.

Smith pointed out that, “PLAs have been around since the construction of the Hoover Dam” and that there are many projects covered by PLAs throughout the state, including for the Los Angeles and San Francisco International Airports, L.A. School District, and Port of Oakland. Pointing to PLAs in the private sector, Smith said, “all the major oil companies see PLAs as efficiency agreements.” Smith told the Council, “We also partner with groups working on criminal justice reform. We are working on the other end of the justice system” by training and employing formerly incarcerated individuals on PLA projects. Smith said the SBCTC also initiated a program to train parolees in the building trades multi-craft core curriculum one year before they are released “to give them a leg up” in training for construction jobs.

Sprinklerfitters Local 483 Business Agent Tony Rodriguez said he had learned after 25 years in the field that PLAs work. “If they didn’t work, both sides wouldn’t keep coming back to the table,” he said. Rodriguez noted that of the 37 schools in San Francisco that were modernized under terms of a PLA for a 2006 bond measure, 18 were done with union general contractors and 19 done using non-union general contractors. “They used part of their workforce, and hired from the union halls,” he said.

Operating Engineers Local 3 Business Representative Charley Lavery said when he worked in the non-union sector, there was no guaranteed overtime, and wage theft was common. “In a world without a labor contract, without dispute resolution, there is wage theft,” Lavery said. “The State has taken the high road with a PLA that guarantees high standards.”

After hearing from Building Trades representatives, the Judicial Council allowed Eric Christen of the ABC-affiliated Coalition for Fair Employment in Construction to speak again, and repeat the false claims that PLAs discriminate against non-union contractors and “prevent small business owners from competing on and winning construction projects”– despite evidence to the contrary.

At stake for the Building Trades is billions of dollars worth of work building new courthouses, and renovating and upgrading existing courthouses around the state. Many projects funded by Senate Bill 1407 in 2008, which authorized up to $5 billion in bonds to build or renovate courthouses in 32 counties, were cancelled or delayed during the recession that followed as the State of California shifted $1.5 billion into the State’s general fund. “As a result, the Judicial Council had to indefinitely delay four more projects, leaving a total of 11 previously identified and planned SB 1407 projects indefinitely delayed and desperately in need of funding,” the Judicial Council reported. After several years of delays, the Judicial Council completed 29 courthouse projects by the end of August 2017. Another 17 projects are in various stages of development. “Meanwhile, another 100 critically needed construction projects require funding. These projects are needed to replace courthouses – most built 50 to 100 years ago – that are undersized for the needs of California’s growing population and cannot meet the seismic, safety, security, and accessibility requirements of modern courthouses,” the Judicial Council reported.

Among the courthouses needing modernization and seismic safety upgrades is the 60 years old San Francisco Hall of Justice at 850 Bryant Street. Then-Mayor Mark Farrell and District Attorney George Gascon sent a letter to Governor Jerry Brown in January urging the governor to return $1.6 billion to the state Judicial Council for courthouse construction. While the City plans to demolish the building eventually, there are no plans yet for a new permanent courthouse facility in San Francisco.