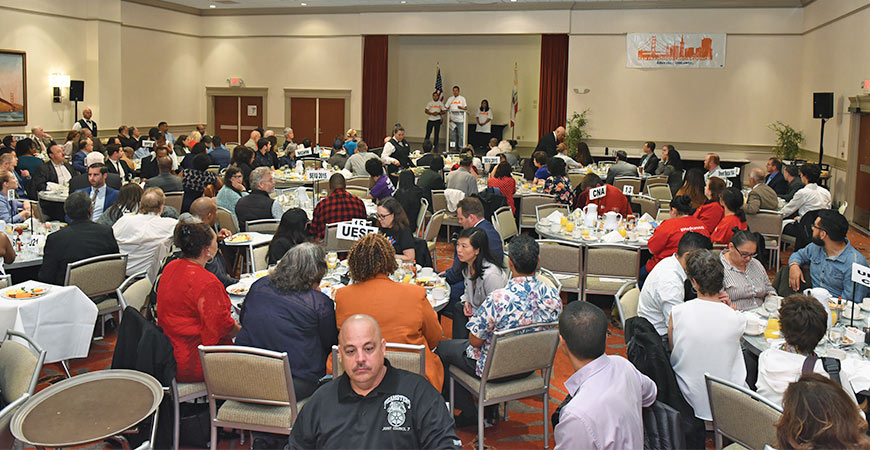 With the memory of the Janus v AFSCME Supreme Court decision still fresh and increasing attacks on labor in general coming from the Trump White House, SFLC Executive Director Rudy Gonzalez disputed the assertion that the Bay Area is in a protective bubble against such attacks.

“It’s a fortress, not a bubble,” Gonzalez said, addressing 400 guests at its annual Pre-Labor Day Breakfast, “and we will fight to defend it.”

Wheeler, a long-time UA 38 member, spoke to the importance of passing a citywide Project Labor Agreement. The mother of four children who are also all union plumbers – three are UA 38 members as well – Wheeler stressed the value of good-paying union jobs.

“It’s afforded me and my family health, welfare, pension, benefits and an opportunity for me to succeed,” she said. “I want everybody to be afforded opportunities like me and my children have. There’s nothing better than this.”

Mayor Breed received a warm response as she talked about the historical contributions of organized labor, including workplace safety, due process rights, the ability to collectively bargain, weekends and overtime.

“Without organized labor, we would not enjoy many of the protections that we have today,” Breed said. “Labor helped build this country and helped build the middle class.”

While emphasizing that labor has made its mark historically on workers rights, Mayor Breed cautioned that the Trump administration and its allies are focused on turning back the clock.

“While organized labor has always been under attack, what we’re seeing now is unprecedented,” Mayor Breed said. “But we won’t back down. If I know anything about labor, what we do best is fight. We fight for what we believe in, we fight for our values, we fight for the people, and we’re not going to back down here in San Francisco.”

“San Francisco has always been a labor town,” she added. “When San Francisco leads, the rest of the country follows. Labor is in our DNA in this city, and as mayor, I will continue to do everything I can to stand up for working people.”

Breed also addressed the city’s lack of affordable housing, promising to work with the trades to build more housing, faster.

“Today we have a number of challenges that we are facing,” Breed said. “It’s far too expensive for families and working people to live in San Francisco. It’s not OK to let our city rely on working people to build our infrastructure, keep our transit moving, teach our children and work for our service jobs, but not be able to afford to live here.”

“Part of what we have to do in this incredible city is make sure that we don’t leave anyone behind,” Breed continued. “And that’s why labor is so important, because you look out for the fabric of our city for people who often times may not have a voice to express themselves against many of the challenges that face our community time and time again.”