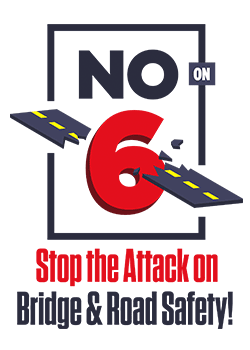 Both Labor and Business Agree: Vote NO on Prop 6 this November

The State Building and Construction Trades Council and California Labor Federation strongly oppose Proposition 6 on the November ballot. The proposed initiative would repeal California’s Senate Bill 1, the Road Repair and Accountability Act passed last year that has enabled California to increase its annual investment in roads, bridges, highways, transit systems, bike paths and pedestrian facilities by $5.2 billion annually through a small increase of 12 cents a gallon in the state tax on gasoline.

The Labor Federation’s Steve Smith called Prop 6 “one of the most important issues voters will decide this fall,” noting that it “would also set the terrible precedent of repealing much-needed revenue that protects our families and creates good-paying jobs.”

Funding from SB 1, which would be lost if Prop 6 passes, will support the repair, repaving and reconstruction of over 84,000 lane miles on nearly 19,000 miles of roadway over 10 years. SB 1 also invests in public transit and helps fund the replacement of 556 state and local bridges that are structurally deficient or functionally obsolete. Several studies on the economic impacts of state investment in transportation under SB 1 show the measure is critical to the state’s future, and benefits workers.

A report by the American Road & Transportation Builders Association (ARTBA) found that, in the San Francisco Bay Area alone, transportation investment enacted under SB 1 “will support at least $34.5 billion in increased economic activity and benefits for all San Francisco Bay Area residents and businesses over the next 10 years.” Statewide, SB 1 will lead to over $182.6 billion in economic activity and benefits over the next 10 years. The study notes that, “More than half – 56 percent – of California’s bridges are at least 50 years old – the eighth highest rate in the nation. In the San Francisco-Oakland urban area, 77 of 1,343 bridges (20 feet or longer) are structurally deficient, meaning there is significant deterioration of the bridge deck, supports or other major components.”

The study found that SB 1 funding will also support an additional 68,203 jobs on average each year statewide – 682,029 jobs over 10 years, with workers’ earnings adding up to $3.3 billion per year, and their earnings spent further boosting the economy. In the San Francisco Bay Area, SB 1 funds would support or create an additional 12,293 jobs on average each year throughout the economy, including in construction, transportation and warehousing, retail, and other services. “These workers will earn over $537 million in wages annually, totaling $5.4 billion over 10 years,” the ARTBA report concluded. Worker spending would result in a $1.9 billion increase in sales and output by San Francisco Bay Area businesses annually. Those job gains would be lost if Prop 6 passes. The California Chamber of Commerce and business organizations throughout the state oppose Prop 6 because it would eliminate 68,000 jobs and $183 billion dollars in economic investments as thousands of road construction projects are halted.

Bay Area projects that would lose funding under Prop 6 include hundreds of projects to fill potholes and repave crumbling roads, improve the safety of local roads and bridges, relieve traffic congestion, and make safety improvements for pedestrians and bicyclists. If Prop 6 passes, construction will come to a grinding halt in every city and county in the state, wasting money and making road conditions even worse, opponents say.

The No on Prop 6 campaign notes that, “The design, construction and maintenance of transportation infrastructure in California supports 419,790 full-time jobs across all sectors of the state economy. These workers earn $17.8 billion annually. Approximately 7.1 million full-time jobs in California in key industries like tourism, retail sales, agriculture and manufacturing are completely dependent on the state’s transportation network. Maintaining this higher level of transportation funding will be critical in allowing the state to improve road and bridge conditions, relieve traffic congestion and improve traffic safety. If California is unable to maintain its current level of transportation investment, the cost to the public of deficient roads, traffic congestion, and a lack of adequate roadway safety will increase and economic development opportunities and quality of life in the Golden State will be diminished.” The campaign notes that far from being an added burden to taxpaying drivers, SB 1 funding would save families over $700 a year since “the average California driver already spends $739 per year on front end alignments, shocks and tire repairs because of driving on bad roads.”

“Prop 6 will make road conditions worse and jeopardize the safety of California drivers. Furthermore, in an emergency, every minute counts – so safe and well-maintained roads help ensure that first responders can arrive at the scene quickly and save lives. Prop 6 could delay response times and makes our roads less safe,” said California Professional Firefighters President Brian Rice.

The measure was put on the ballot after a petition campaign funded by Carl DeMaio, a former San Diego City Council member who authored a 2012 San Diego measure that imposed a six-year freeze on pay levels used to determine pension benefits for city workers. DeMaio also backed Prop 32, which would have restricted unions from engaging in political activities. Republican John Cox, Donald Trump’s favored candidate for California governor, has made repealing the gas tax a centerpiece of his campaign, in what some analysts say is an attempt to get anti-tax Republicans to the polls to support an otherwise lackluster and unknown businessman.