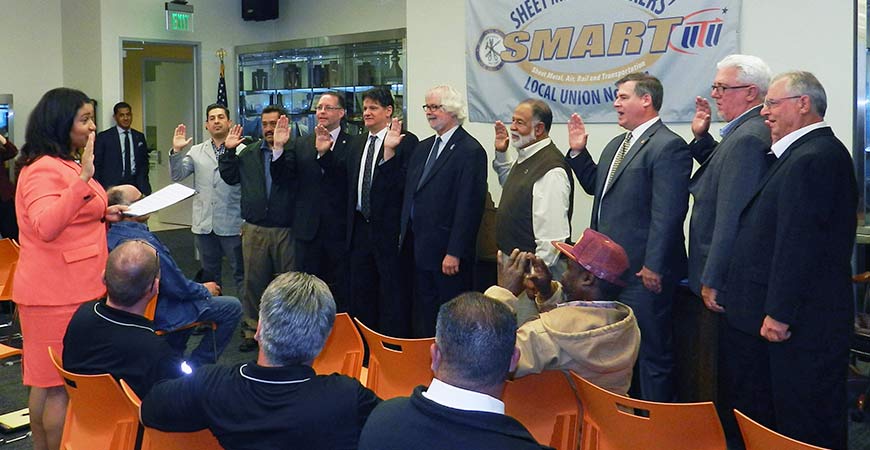 Tim Paulson took office officially August 2 as the new Secretary-Treasurer of the San Francisco Building & Construction Trades Council. The SFBCTC hired Paulson earlier this year as a Business Representative with the aim of him succeeding Michael Theriault upon retirement.

A Journeyman Tilesetter since 1981, Paulson previously served as Vice President of the SFBCTC starting in 1997. He was a principal officer and business agent for the Bricklayers, Tilelayers, and Allied Craftworkers Local 3, and an Apprenticeship Coordinator for the Northern California Tilelayers and Tile Finishers Joint Apprenticeship and Training Committee. A San Francisco resident, Paulson holds Bachelor’s degrees in economics and political science.

As the Executive Director of the San Francisco Labor Council since September 2004, Paulson coordinated political activities, organized events and rallies, and supported affiliated unions in bargaining and contract negotiations. As the leader of the Labor Council, Paulson helped negotiate the Community Benefit Agreement with the Lennar Corporation that guarantees 35 percent of the 10,000 new homes in the former Hunters Point Shipyard will be affordable for working families.

Prior to working for the SF Labor Council, Paulson worked as the Political Director and Assistant Executive Officer of the San Mateo County Central Labor Council. There, he successfully organized a campaign for security screeners at the San Francisco International Airport and helped establish SFO’s Quality Standards Program that guarantees good wages and benefits for airport and airline employees. He previously held the position of Organizing and Political Director for the Service Employees International Union’s (SEIU) Justice for Janitors campaigns in Northern California, and led successful campaigns organizing security officers at Bay Area office buildings.

Paulson said when he worked for SEIU, unionized janitors were making $17 an hour while security guards were only making the then minimum wage of $6 per hour. He was able to get a charter from SEIU for the security officers local, which became SEIU 24/7, now called SEIU-United Service Workers. The union actively organizes security guards for tech companies in Silicon Valley.

The broad experience in the labor movement has been helpful, Paulson said. “When I was a candidate to lead the Labor Council in 2004 when Walter Johnson retired. some people said, ‘he’s too close to the building trades.’ Others said ‘he’s too close to SEIU’ or ‘he worked on politics for the San Mateo CLC.’ Then someone said, ‘he knows everybody’,” Paulson recalled.

Getting a citywide PLA is a priority for the Building Trades Council, Paulson said, noting that, “Negotiations for PLAs have become more sophisticated since the time I worked in the trades. There is a tremendous amount of detail in the terms of the agreements. Mike has been very diligent and intelligent in negotiating and getting successful PLAs – making sure with the lawyers that we get the best deal and that community benefits are the norm in development deals.”

Paulson said he is proud of the Community Benefits Agreement for the Bayview/ Hunters Point Shipyard development he negotiated on behalf of the SFLC.

“It was the broadest and most progressive agreement in the U.S.,” he said. “We got card-check neutrality agreements for six different industries, and a commitment of 35 percent affordable housing for the first time in a private development. Despite the difficult negotiations, we still have a large amount of funding from the developer for the community. The community decides how to spend the money – over $20 million – on job training, health care, or other programs. I stand by the fact that was the best we could have gotten.”

Addressing revelations that contractor Tetra-Tech botched and falsified reports about contaminated soil at the Hunters Point Shipyard development, Paulson said, “We are absolutely appalled that the contractor hired by the U.S. Navy botched the clean-up of the contaminated land at the Phase I part of the project. It is important to note it is not a problem at Candlestick Point.”

Paulson is also proud of the work the Labor Council did along with Tom Ammiano on San Francisco’s Health Care ordinance, a kind of analogue to the Affordable Care Act. However, his views on other issues at City Hall, such as the delay in passing a citywide PLA, are less favorable.

“We are very disappointed with San Francisco City government,” he said. “It doesn’t matter if they identify as progressive or moderate, nobody on the second floor of City Hall has stepped up to lead on the two most important issues for us right now – the citywide PLA and extending the MCAO wage. We have said these are our priorities for a year and a half and they have failed us. It’s very disappointing it hasn’t gotten done as they go on vacations this summer. The second floor has failed us on the citywide PLA, the MCAO, and on Airbnb regulations, which we want in order to protect the livelihoods of hotel workers.”

Noting that he and Theriault worked well together over the past 13 years as leaders of their organizations, Paulson said, “The Labor Movement in San Francisco stays together. Some people think the Labor Council and Building Trades Council are pitted against each other, but that is a false narrative. The fact that the Building Trades recruited a progressive who worked for the SFLC to replace Mike is a positive sign. And the CLC hired a progressive Teamster, Rudy Gonzalez, so I expect to continue the positive relationship between the two organizations. That we are starting our new jobs at the same time is a positive, as well as being in the same building. Having Mike set up his office in our building was a good move and helped us collaborate and work together.”