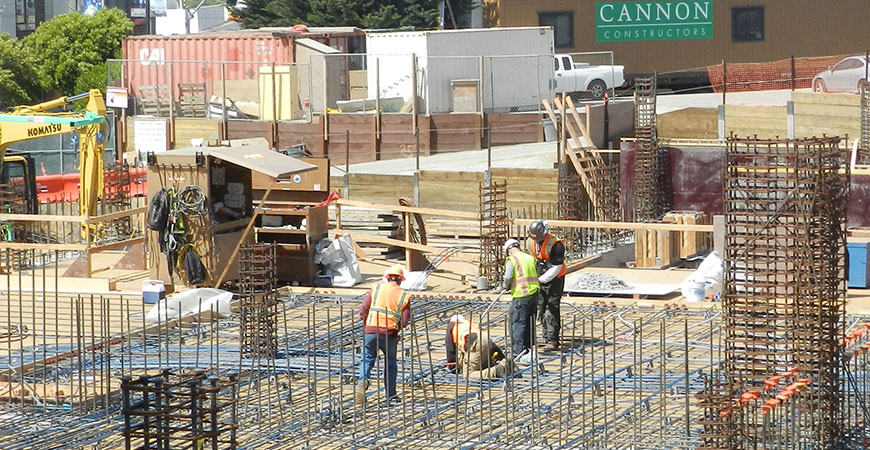 Cannon Constructors is the general contractor for the $140-million expansion of the San Francisco Campus for Jewish Living. - Photo by Paul Burton

Work on the expansion of the Jewish Home of San Francisco, recently renamed the San Francisco Campus for Jewish Living, is progressing with rebar columns rising above street level at the jobsite at Mission and Silver Streets in the Excelsior District.

Union signatory contractor Cannon Constructors is the general contractor for the $140-million project that will add 270,000 square feet to the facility that has served as a home for senior citizens since the late nineteenth century. The SFCJL committed to using union labor on the project when it was approved by the San Francisco Planning Commission in 2015.

A project description notes that SFCJL's mission is to enrich the quality of life of older adults, and the expansion "represents our most significant re-envisioning since we were established in 1871. When completed, our contemporary, continuum-of-care and service network will be uniquely well-equipped to meet the increasingly complex needs of today's growing population of seniors throughout the region, and offer a much broader spectrum of living and support options."

The SFCJL serves 1,800 patients and residents each year in its Jewish Home & Rehab Center and offers health care services to non-residents. The expansion will enable it to add another 200 assisted-living and memory-support units. Admission is not limited by religious or cultural affiliation. Services for non-residents will include a health care clinic for primary and specialty care, healthy aging and wellness programs and services, lifelong learning opportunities, in-home services and support services for caregivers.

Cannon broke ground in October 2016. Demolition and removal of the main building was completed in September 2017, with excavation starting in October 2017. The second phase of the project includes excavation, temporary shoring, and the construction of the new building's foundation. Drilled piers, rather than driven piles, are used for installing the shoring. Approximately 40,000 yards of soil will be excavated from the site, down to 20 feet in some areas. Foundation and concrete framework on the new reinforced concrete structure began in January 2018. A small crew of union ironworkers is currently erecting rebar columns and walls. Work on street utilities and underground electrical, storm water, and sewer lines also began earlier this year.

The expansion of the campus will enable the SFCJL to expand services to seniors and their families and increase the number of residents and short term patients from 374 to between 575 and 600 people per day. The project will add 115 assisted-living apartments and 75 memory care and assisted-living suites and modernize 230 skilled-nursing suites, 120 short-stay rehabilitation suites, and 12 behavioral health suites.

The project will also include at least 1,800 square feet of retail along Mission Street that could be increased to as much as 4,600 square feet. The project will create over 150 new full-time and part-time jobs in retail, and health care jobs at the unionized facility, in addition to hundreds of construction jobs.

Designed by a joint venture of Ankrom Moisan and Van Meter Williams Pollack architects, the project is being built to CalGreen standards to meet the City's Green Building Ordinance, similar to LEED Gold for sustainable buildings.

A new 45,000-square-foot Byer Square will be built next to the current facility and will feature a pharmacy, a health club, a Jewish education center and a courtyard café.".

Work on the newly expanded facility is set to be completed by May 2019.