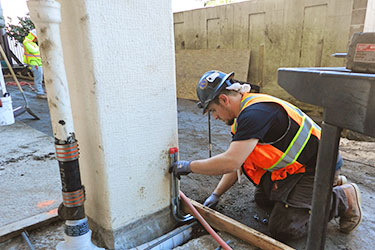 Renovation work continues at Bridge Housing’s Mission Dolores as part of a city-wide modernizing of public housing for nonprofit developers thanks in part to the Rental Assistance Demonstration program. Photo by Paul Burton

After years of poor maintenance and neglect in San Francisco’s public housing sector, an influx of federal funds is finally providing hope to residents starved for improved conditions.

Union construction crews are nearing completion of several projects modernizing public housing for non-profit housing developers in San Francisco. The first phase of rehabilitation work on 1,425 units began in November 2015 and was completed in 2017. Phase II projects are scheduled to be completed by the end of 2018 or early 2019, with 2,066 units throughout the city getting much needed repairs.

In March 2015, the City reached an agreement with the federal Housing and Urban Development (HUD) agency to fund repair work on up to 4,584 public housing units as part of the Rental Demonstration Assistance (RAD) program. Part of the plan has called for transferring ownership of the properties to non-profit housing developers who are now in the process of completing over $700 million in deferred upgrades. According to the Mayor’s office, that work will involve “stabilizing residents’ tenancies with professional management and support services and preserving the units as decent and affordable housing for the City’s most vulnerable residents.”

Work is being done under terms of a project labor agreement between the San Francisco Housing Authority (SFHA) and the San Francisco Building Trades Council (SFBCTC). While the PLA is with the SF Housing Authority, non-profit housing developers who now own and manage the properties are handling the construction; they include Bridge Housing, Mercy Housing, Chinatown Community Development Center, Mission Economic Development Agency, Community Housing Partnership, and Tenderloin Neighborhood Development Corporation. Many have employed union building trades members on their other projects that provide important improvements in units that house low- income residents, seniors, and disabled people. That work includes seismic and structural upgrades, roof replacement, bolstering accessibility, upgrading elevators, and modernizing the major mechanical, fire safety and electrical systems.

The 13-story building built in 1970 is home to many low-income seniors and disabled individuals. TNDC’s Gabe Speyer said unique features of the project include turning the ground floor area into a more open community space and expanding the building into the parking lot behind the building. He also mentioned that TNDC is teaming up with Glide Community Housing to provide on-site services for residents with a new office for the service provider.

“[SFHA projects] have been starved for capital to make repairs for decades,” Lauderbach said. Despite strides being made with the RAD program, he estimated that plenty more of the city’s public housing stock outside the program’s scope is still in need of repair work. Lauderbach cited a lack of available federal funds as the main cause of poor building maintenance, which he deems a nationwide issue.

Subcontractors on the all-union project include Danny’s Drywall, Dawson Electric, Daley’s Drywall, and Southwest for abatement. Subcontractors have been striving to meet the 20 percent local hire goals and bring on a few City Build graduates, though Lauderbach said meeting local hiring goals has been a challenge. Another challenge, he said, has been getting subcontractors bids on projects to coincide with booming construction periods in the private sector.

Other upgrades include a new laundry room, new flooring, kitchen cabinets, elevators and windows. The lower half of the building is also getting a new exterior. Since work is progressing on time and under budget, TNDC will also be able to add solar panels to the building, which were not planned in the original design. Energy efficiency upgrades include installation of LED lights and water saving devices like low flow toilets. Work began in November 2016 and is scheduled to be completed by April 2019.

TNDC is also nearing completion of work at the 276-unit Clementina Towers at 320 and 330 Clementina Street, which also includes structural, life safety and accessibility upgrades and general renovations.

“The projects we renovated under the RAD program are some of the most challenging we’ve experienced, involving relocating residents, working around occupied units and upgrading facilities that had become functionally obsolete,” she said. “The contractors really understood our priorities and the needs of residents. Most importantly, these properties now offer significantly improved homes for some of San Francisco’s most vulnerable people.”

The interior work includes renovation of community and public spaces, mechanical and electrical systems upgrades, as well as new kitchens and bathrooms and interior finishes in all the residential units.

General Contractor Nibbi Brothers’s Project Superintendent James Zimmerman, a member of Carpenters Local 713, said the project is being done with all union labor, as is standard practice for Nibbi. Subs on the job include DLI Mechanical for plumbing, D.W. Nicholson for structural and miscellaneous steel, Intermountain Electric, Valdez Painting, Daley’s Drywall and Marina Mechanical. CPM Environmental did abatement work at the beginning of the project, removing lead paint and asbestos from the tower built in 1974.

Several apartments will become fully accessible to meet the requirements of the Americans with Disabilities Act, with expanded floor plans and doors widened to become “mobility units” for wheelchair-bound residents.

Mercy Housing’s Evelyn Perdomo said the building would be GreenPoint Rated for energy use. New energy efficient boilers and lighting have been installed as part of the modernization work. Art Carlos, a Laborers Local 261 member and Laborers Foreman for Nibbi, said the building’s electrical panels, exhaust vents and flooring are also getting upgrades. He pointed out that the new water heaters and boilers with modern electronic controls would save time and maintenance costs as they make diagnosing and fixing problems faster.