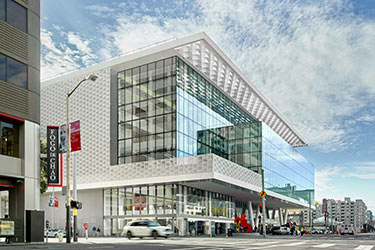 The Moscone Convention Center Renovation project remains on-schedule and is slated for completion by December 2018. The project will upgrade the existing convention center and add 305,000 square feet of space. Webcor Builders is the general contractor for the $500 million improvement and expansion.

The interior renovation includes upgraded finishes, improved on-site audio/visual capacity, improved functionality for different types of conventions and compliance with the Americans With Disabilities Act. The expansion will add new exhibition space, meeting rooms, ballroom space, a kitchen, pre-function space, and other support areas in a new building on the south side of Howard. The project will create an estimated 3,407 construction jobs through 2018. The new four-story steel structure was 78-percent complete in early March and is set to be topped off March 12.

Brook Mebrahtu, Senior Project Manager for the San Francisco Department of Public Works, which is managing the expansion, said the upgrades add more contiguous exhibition space to the Moscone Center, which mostly hosts conventions for the medical and technology industries. "It gives us the flexibility to accommodate more shows," he said, adding that it should help the Moscone Center remain competitive nationally as a potential landing spot for conventions.

A survey of Moscone users conducted by the San Francisco Travel Association confirmed a need to expand the convention center. It found that space constraints could deter convention planners from using Moscone in the future. The center is smaller than the 12 most competitive convention centers in the U.S., with less than half the exhibit space per square foot of meeting space—1.7 square feet compared to the other 12 convention centers' average of 4.3 square feet. According to the DPW, Moscone's space constraints resulted in a direct spend loss of nearly $2.1 billion for the years 2010-2011 through 2019-2020.

Webcor Builders was chosen as the general contractor in January 2013. The first construction phase started in November 2014 and involved excavation along Howard Street and tunneling to connect Moscone's three buildings underground, as well as starting the interior improvements at Moscone West. Crews completed phase II in September 2017 in time for the annual conventions for Oracle and Salesforce.

"During the construction period, 40 conventions have gone through our job site," Johnson. "We've had to work around them. It takes a different mentality to work around conventions that are going on. It adds an extra dimension to the work and it has driven how we've approached the job. We couldn't be heard or seen while Oracle and Salesforce were going on. We had to stop working for an hour during a keynote speech for MSNBC. There are strange requests that you don't have on other jobs."

Still, Johnson believes all that hard work will be worth it in the end, adding that the Moscone work will be remembered for years to come.

"It's one of those jobs where you won't forget that your hands helped build it," Johnson said.

Webcor's Construction Manager Thomas George said all the subcontractors on the project are union. Major subs include SME Steel for structural and miscellaneous steel, Webcor Concrete, Rosendin Electric, Southland for plumbing, mechanical, and HVAC, Enclos for glazing, Alamillo Rebar, NorthStar Demolition and Cosco Fire Protection. Webcor Builders has a crew of carpenters, laborers and operating engineers on the job. There are an average of 200 tradesmen and women on the job with between 400 and 500 at peak construction times. Webcor also did the $56 million renovation of the center between 2010 and 2012 that consisted of infrastructure upgrades, including the replacement of mechanical and electrical systems, conveyance modernization, and fiber optic data and telecommunication upgrades.

Mebrahtu said DPW has prioritized scheduling the construction work without disturbing convention activities. George said Webcor met with union representatives over the past two years to coordinate construction work and address concerns of the union members who set up exhibits, build displays, connect power systems, and run lights, sound and video at the shows and conventions. He added that electricians that have done convention set up and now also work on the construction side, share their knowledge.

Joe Toback, Business Representative for Sign and Display Local 510, told Organized Labor in 2013 the union wanted to have a voice in the process and the design because it impacts the people who work there. He said the union had concerns about the swing stage scaffolding and access to rigging points, as well as problems applying graphics on some windows.

"The architects did not listen and were not interested," Toback said recently. He said the architect spent more time listening to neighbors' concerns about shadows than the needs of the people working trade show who have knowledge about the day-to-day functioning of the facility. Toback said Local 510 works with Webcor on a safety committee to deal with potential problems when trade shows and construction are happening simultaneously.

Toback added that he's looking forward to the increased workload for 510 members as new shows make Moscone a destination and shows that skipped the convention center because of the construction return. He said that the local has brought on 32 new apprentices in preparation for more work next year.

"We're looking forward to a revitalization of the Center," Toback said "It will be a modern, state of the art facility that's environmentally sensitive."

Mebrahtu and George both find it challenging to meet the City's local hire goals of 50-percent of apprentices and 25-percent of journeymen, mostly because construction is booming and there is a shortage of local workers. Mebrahtu said the project is exceeding the goal of 15-percent Local Business Enterprise (LBE) participation, tracking at 18-percent. LBEs consist of minority-owned and women-owned businesses and other small local contractors.

George said some subcontractors sponsor local apprentices and City Build students to get them on the job. He said there are at least 25 City Build graduates on the project now.

Mebrahtu said Moscone would be a "net positive" facility for water use, capturing more rainwater and groundwater than water used. The non-potable water will be used for irrigation as well as supplying water for the DPW's street cleaning trucks. Mebrahtu also said Moscone will also have the largest solar panel array of any San Francisco building, with solar supplying 19.4-percent of the facility's electricity.

DPW touted the economic benefits of expanding Moscone, which include a $20 million projected increase in hotel tax revenue. Income for Moscone from conventions and total visitor spending will exceed $734 million through 2026, according to the DPW.

The convention center expansion and renovation will also produce over 3,400 permanent, new jobs, including for line service workers in the hospitality industry that will benefit from more visitors to Moscone.

The expansion project will also reshape the streetscape of Moscone's connection to the surrounding Yerba Buena neighborhood. Upgrades include the implementation of new bicycle lanes, as well as pedestrian and urban design improvements for neighboring residents and businesses.