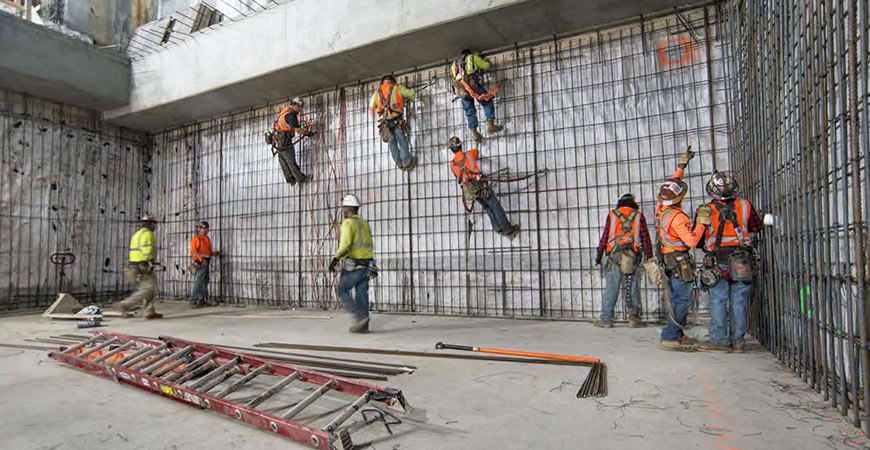 The Central Subway project is expected to be completed by December 2019. A team of workers inside the lower level of the north concourse are constructing rebar cages which will become the finished interior walls. - Image Courtesy San Francisco Municipal Transportation Agency

Work on the Central Subway project is progressing on schedule to be completed and operational by December 2019, according to the San Francisco Municipal Transportation Agency (SFMTA). The $1.6 billion project will extend the existing, mostly underground Third Street rail line from the 4th Street Caltrain Station to Chinatown, bypassing heavy traffic. Three new underground stations and a new street-level station along the 1.7-mile extension of the rail line are under construction in Chinatown, Union Square and the Moscone Convention Center.

The original completion date for the project was December 2018, but disagreements over scheduling between the SFMTA and Tutor-Perini set the project back. The SFMTA reported that the contractor's excavation work was behind schedule in 2017. The contractor cited "infrastructure delays" related to utility relocation work and underground conditions featuring rocks harder than they expected. Tutor-Perini estimated that the project would not be completed until 2021.

The SFMTA and contractors revised the work schedule to allow Tutor-Perini to change the order in which parts for the south side of the Chinatown station were excavated to make up for lost time. The SFMTA based its estimate that the subway would be done in December 2019 on findings by an independent monitor last October.

Work in early 2018 on the Chinatown station has included tunnel excavation, removal of excavated material, placing shotcrete, waterproofing, and installing rebar and formwork. Some excavation work was delayed last year but has resumed and the project is back on schedule.

At the Union Square/Market Street Station site, crews are building internal walls, columns, and floors on multiple levels, and continuing placement of the metal deck at platform and mezzanine levels and installation of emergency exit stairs and escalator ramp walls and slab transition. Rough-in work to prepare for installation of elevators, escalators, and fire sprinklers at the Union Square station also began in early 2018.

Similar work is also underway at the Yerba Buena/Moscone Station. The SFMTA reported that electrical rough-in work at the Mezzanine level is 80-percent complete. Other work included concrete pours for the stair walls and platforms, as well as installing two elevators and rough-in work for fire sprinkler, installation. Utility work at 4th and Howard Streets is ongoing.

At the new street-level station at Fourth and Brannan Street, construction crews have installed surface station pile caps and are continuing track installation inside tunnels.

The Central Subway project is providing hundreds of jobs for the building trades, including ironworkers, laborers, carpenters, electricians, operating engineers and cement masons.

The majority of funding for the Central Subway is from the Federal Transit Administration's New Starts program, with a total commitment over the life of the project of $948.4 million. Other funding comes from a mix of federal, state and local sources, including state transportation bonds.