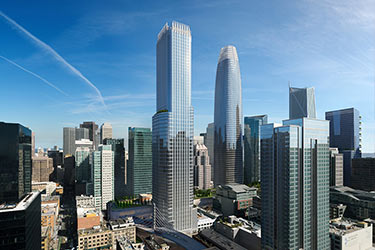 Developers Also Working on Block 4 Proposal for the Transbay District

“Our revised plans for Parcel F are the product of an exceptional collaboration with Planning Department and other city staff, the Transbay Joint Powers Authority, and the local community, which have resulted in what we feel is a significantly improved design,” said Hines Senior Managing Director Cameron Falconer. “We look forward to continuing our progress and shared vision with the city and our community stakeholders.”

CurbedSF reported that, “The 2016 design featured a boxy spire of glass with a twisted nest of columns at the base. In a 2017 assessment, city planners suggested a tower that looks less stark and confrontational than previous designs: As one of the four largest towers in the city, the Department recommends that the massing [i.e., shape of the building] be more gently and iconically-shaped.”

Parcel F is an odd-shaped site adjacent to the Terminal that will serve buses and trains from around the Bay Area and become the “Grand Central Station of the West.” A press release from the developers noted, “The updated designs also provide a refined through-block pedestrian passageway from Howard to Natoma streets and a dramatic public elevator connection to the Transbay Transit Center Rooftop Park via a fifth-floor sky bridge.”

The tower at Parcel F is designed by Pelli Clarke Pelli Architects – the same firm that designed the new Transbay Terminal and the Salesforce Tower – in partnership with the local office of HKS Architects. It would become the fifth tallest building in San Francisco following the Salesforce Tower at 1,073 feet tall, the 910 feet tall Oceanwide Center currently under construction, the Transamerica Pyramid at 853 feet tall and 181 Fremont at 802 feet tall.

Hines and Urban Pacific are also working on developing the Block 4 site on Howard Street between Beale and Main streets, adjacent to the future Transbay Park atop the terminal. Current plans for Block 4 call for a 45-story, 450-foot tall residential tower designed by SCB Architects with mid-rise and townhouse residential buildings around the base. The project will include more than 500 residential units, with 45 percent of the units on site available at below market rate. The master plan for the site also includes podium buildings of 85’, 65’ and a 50’ townhouse block. The podium buildings will include approximately 250 units designated as affordable housing. The ground level will include 16,000 square feet of retail space. The developers are targeting U.S. Green Building Council Leadership in Energy and Environmental Design (LEED) or GreenPoint Rated certification through sustainable building practices and energy efficient systems.

The Block 4 and Parcel F sites are among 11 sites the City of San Francisco and the Transbay Joint Powers Authority set aside for private developers. Overall, the City’s master plan for the 40-acre Transbay District will add more than 6 million square feet of commercial space and 4,400 homes in the South of Market (SoMa) area, anchored by the bus and train terminal now under construction.

Representatives from the developers talked about their plans at the San Francisco Building Trades Council Business Agents meeting on January 23. Chris Collins of Urban Pacific said the developers had been working on a final proposal for the Parcel F site for 18 months and could go before the Planning Commission in four months. Groundbreaking would take place a year after that, with construction to be completed in four years. The developers have yet to choose a general contractor. Collins said Urban Pacific will be the construction manager. As part of a “grandfathered” area when California dissolved Redevelopment agencies, Block 4 and Parcel F are subject to prevailing wage requirements in construction. Collins said construction will likely be a hybrid structural system of a concrete and steel decks, or a steel core, with piles going down to bedrock.

Collins said plans for Block 4 could be finalized six to nine months after Parcel F and be ready to go through the City’s approval process. Construction of Block 4 will be complete in three years, he said.

Collins said the developers would seek out small local companies to meet the requirements for Small Business Enterprise (SBE) hiring for TJPA projects, which are administered by the Office of Community Investment and Infrastructure (OCII) for the former redevelopment area. The OCII sets a goal of 50-percent SBE participation.

According to the OCII, public and private investment in the Transbay Neighborhood is creating approximately 4,150 housing units, 35 percent of which will be affordable units, 2.6 million square feet of office development and 200,000 square feet of retail space, 9.2 acres of parks, and major transportation improvements. OCII also provides crucial funding for the Transbay Transit Center through tax increment revenue and proceeds from the sale of former State-owned properties.

Hines, based in Houston, is a global development company active in 21 countries with $100 billion of assets under management, and has been involved in developing projects in San Francisco for over 20 years. San Francisco-based Urban Pacific focuses on large-scale urban projects, including One Rincon Hill.