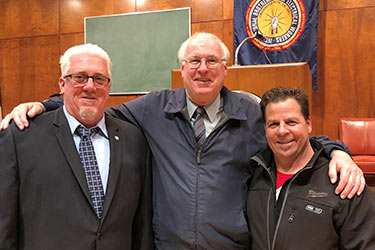 IBEW Local 6 Assistant Business Manager Kevin Hughes retired earlier this month after 24 years. Hughes served as City Representative for the union, representing public sector electrical workers in San Francisco after working as an inside wireman in the private sector and for the City for several years.

IBEW Local 6 Business Manager John Doherty wrote in last month’s Organized Labor that when Hughes first started working for the City, “[Kevin’s] work was influential in re-establishing the voice of City electrical workers in their local union. It proved to be the groundwork for other successes in the years to come.”

Organized Labor spoke with Hughes about some of those successes, changes he has seen over the years and how building trade workers benefited from having an advocate in the public sector.

Hughes said Local 6 represents electrical workers in the City and County of San Francisco, including the San Francisco Metropolitan Transportation Agency, the San Francisco Unified School District, City College of San Francisco, UCSF and those working with private sector contractors. They are in the fields of power generation, electro-mechanical and associated line work for the City’s rail system, more traditional electrical work related to physical plant installation and on-voice and data transmission systems. Hughes referred to modern technological changes in electrical as “rapid and broad,” explaining that systems that had long been hard-wired – electrical control units, voice and data systems – have switched from analog to digital.

Along with changes in technology, the way public sector contracts are set has also changed since Hughes began working as a City Rep in 1994. “The mechanism used to set wage rates at that time was the Salary Standardization Board,” he said. “The SSB would conduct a survey, then set raises based on an average rate of increases. That changed in 1994 for all bargaining units in the City, and was a significant change for public employees.” Hughes noted that City negotiators were not as familiar with collective bargaining as their counterparts on the labor side. Some public sector workers also had less experience negotiating contracts than building trades members.

“Building trades representatives and members made a big difference in the evolution of collective bargaining,” Hughes said. Under collective bargaining, wage increases could be set based on the rate of inflation determined by the Consumer Price Index (CPI). Increases have kept up with the CPI over the years, Hughes said. “The building trades had an advantage because of our experience in the private sector – not just in negotiating wages, but for other terms and conditions regarding the definition of the work week, the work day, and stand-by pay,” Hughes said. He added that the City had broad language defining some terms of work, while the building trades have very fixed terms defining hours of work. That proved to be a challenge for the building trades, with a fixed eight-hour day, dealing with a City staffed 24 hours a day over three work shifts.

Hughes said building trades negotiators had to look at the workday differently and were able to meld the different terms into a document that protected workers. “The City pushed back and tried to limit what we thought was the right rate of wage increase, and the definition of the work day and premium pay for hazardous work such as in confined spaces or at heights.” Hughes said. “The City has evolved and is now much more aligned with the private sector principles for setting wages and benefits,” he said.

While construction workers represent a small portion of the City’s 28,000 employees – about 850 in total – the building trades have had a significant impact on improving contracts for all workers. “When the City and building trades reached an agreement, that would peg the rate of increase for all areas – for SFUSD, CCSF, and other agencies – and lift all workers,” Hughes said. “If we got something in our contract like hazard pay, it would pull up others so in their next contract they would also get it.” He mentioned that if an agency or school district balked at the contract improvement, they would have problems recruiting and retaining employees.

Wages were frozen at different points when the City had a budget shortfall, including during the recession of 2008-2009. Hughes said while workers and the City recovered and wages increased, the City did push back against Labor. “The City was aggressive during down times, especially regarding retiree benefits and the rising cost of health care for employees and retirees,” he said. “City negotiators have done everything they can to try to shift the costs to workers in collective bargaining and through charter amendments.” One example he provided was for so-called “pension reform.” Hughes said Labor has been able to keep health care and pension contributions affordable for the workers, despite the push and pull with the City over the past 12 years.

According to Hughes, the City is always trying to privatize some public sector work. “We hear the small government, no regulations mantra, and we don’t need it,” he said, adding that no oversight and minimal accountability exists when jobs are outsourced.

Hughes also served on the Planning Commission from 2002 to 2006. Supervisor Tom Ammiano appointed him after a charter change that enabled Supervisors to appoint three members. He currently serves on the committee that oversees general obligation bonds. He lauded San Francisco’s record on its bond-funded projects, delivering work on time and on budget.

Born and raised in San Francisco and a resident of the Sunset, Hughes has no big plans for his retirement but is enjoying not being on a schedule.