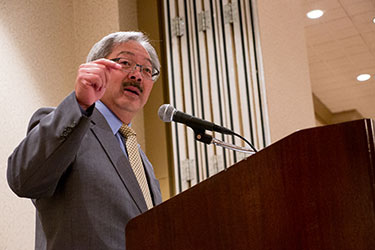 Mayor Ed Lee was a regular at Labor events, including this San Francisco Labor Council Pre-Labor Day Breakfast in 2014. - Photo by Paul Burton

Union, business and community leaders, as well as colleagues in elected office, remembered San Francisco Mayor Ed Lee for his integrity, humility and decency in the days following his unexpected death on December 12.

Mayor Lee, who passed away due to a heart attack, presided over changes in the city that included an increase in construction projects and jobs, the successful transfer of management and rehabilitation of public housing stock to non-profits, and an expansion of the technology sector with major companies locating or expanding their offices in San Francisco.

Lee became Interim Mayor in January 2011 after Mayor Gavin Newsom was elected Lt. Governor. The city's first Chinese American mayor was unanimously confirmed by the Board of Supervisors and sworn in at a City Hall ceremony. At the time, Lee said he hoped to fulfill the remainder of Newsom's term, then return to his job as City Administrator, but he was persuaded by supporters to seek election in November 2011. While the San Francisco Building and Construction Trades Council (SFBCTC) did not endorse Ed Lee, SFBCTC Secretary Treasurer Mike Theriault said at the time that the trades would work with the newly elected mayor.

"It turned out to be a very good relationship," said Plumbers Local 38 Business Manager and SFBCTC President Larry Mazzola, Jr. "He was a genuine guy who cared about the city. He was accessible and listened. He did look out for the building trades and listened to our issues and concerns. He would help when he could and if he couldn't, he would tell us why."

Mazzola said Mayor Lee "had a huge impact on development in the City. Creating housing and addressing homelessness were his two big concerns. He was integral in getting thousands of units of housing on line and getting more affordable housing built through his initiatives." Mazzola noted that Lee worked with Plumbers Local 38 to establish a navigation center at the union's Civic Center Hotel property to help homeless people access services and transitional housing.

At a luncheon sponsored by Organized Labor on Nov. 1, 2012, Theriault, introduced Mayor Lee. "This is the jobs mayor. That's what he calls himself, and that's what he's proving himself to be."

Lee was instrumental is pushing various measures that lead to job creation, including Proposition C, which passed with the support of the building trades and raised $50 million to fund affordable housing and partially offset the loss of redevelopment funding from the state.

San Francisco's unemployment rate decreased from 9.5 percent when Mayor Lee first took office to under 3 percent now. Since 2011, tens of thousands of new jobs were created in San Francisco, with 42,452 jobs created between 2011 and 2014, and another 27,048 jobs created in 2016. A report by the Bay Area Council found that for each job created in the high-tech sector, approximately 4.3 jobs are created in other sectors across all income groups, including retail, education, public sector jobs and construction.

Mayor Lee issued an Executive Directive last September to reduce timelines to get housing projects built by nearly half while leading to the creation of 5,000 new units every year for the foreseeable future. The Executive Directive calls for greater collaboration, accountability and transparency among all city departments involved in the issuing of building permits and enhanced coordination with private housing developers. In 2014, Mayor Lee challenged San Francisco to build 30,000 new and rehabilitated units by 2020. Since then, more than 17,000 units have been brought online, of which 35 percent are permanently affordable.

Lee's 2013 Re-Envisioning Public Housing Plan led to a successful partnership in 2015 between the city and the federal Housing and Urban Development (HUD) agency to address the disrepair in the public housing stock. That effort created hundreds of construction jobs under a PLA and upgraded thousands of housing units for low-income residents.

Theriault characterized Mayor Lee's support of the Project Labor Agreements for the public housing rebuild and SF Public Utilities Commission projects as vital. "We wouldn't have gotten the PLA for the housing rebuild without his support," he said. Theriault noted that Mayor Lee understood the importance of union apprenticeship programs for creating career pathways for San Francisco residents and that, "he was always happy to hear the stories of apprentices and San Franciscans who were hired on projects."

CityBuild Academy Director Josh Arce called Lee "a member of the CityBuild family. He firmly believed that jobs have the power to change lives and he worked hard to deliver local hire opportunities to community members."

Theriault said the 2011 "Twitter tax break" pushed by Mayor Lee that cut payroll taxes and gave the technology company and others an incentive to locate in San Francisco "a huge effect in bringing jobs to the City – jobs in tech and our jobs in the trades."

IBEW Local 6 Business Development Director Joel Koppel, who Mayor Lee named to the San Francisco Planning Commission, said "Many people may not realize Mayor Lee literally enabled a lot of construction workers to get back to work following one of the biggest downturns our industry had ever seen. Between 2009 and 2011, we had seen the worst downturn of our lifetimes. Not only were people not working, their health care and benefits depended on these work hours, so many lost their health care coverage and couldn't take their children to the doctor.

"After a couple of years of really bad times, the Mayor had incentivized businesses to come to San Francisco by giving them a tax break," Koppel continued. "Ed Lee was very specifically responsible for encouraging these businesses to locate in San Francisco and thus affording lots of work for our local construction workers. That was probably the most important thing Mayor Ed Lee did for us, and it was a huge help in a huge time of need. We will never forget him for that."

A Progressive Before it Was Fashionable

Some criticized the mayor for giving tech companies tax breaks that some say exacerbated the housing crisis and contributed to high housing costs. He was considered a "moderate" rather than a "progressive" by San Francisco standards, but did put forward policies to build 30,000 new units of housing by 2020, prioritizing affordable housing, with some success. When he was sworn in in 2011, Lee called for unity and cooperation among the Board of Supervisors' political factions, saying, "If you are a moderate, I am a moderate. And with all due respect for the young leaders on the Board, I was a progressive before it was a fashionable term."

Lee began his career in public service as a civil rights attorney with the Asian Law Caucus in 1979. He then worked for Mayor Art Agnos investigating whistleblower complaints from 1989-1991, served as executive director of the Human Rights Commission from 1991-1996, was director of purchasing and services for the city from 1996-2002, and then worked as director of the Department of Public Works from 2002-2005.

"Though we have had tough negotiations on many issues over the years, I always knew that he cared tremendously for all the people of San Francisco," said San Francisco Labor Council Executive Director Tim Paulson in a statement.

During Lee's tenure, San Francisco passed the highest minimum wage of any city in the United States. "This was accomplished in Room 200 at City Hall with Mayor Lee and his staff," Paulson said. "We will miss Ed Lee's quiet approach as he opened doors for nationally recognized apprenticeship programs and career pathway models that include violence prevention. The door was always open at Room 200. I have known Mayor Ed Lee to be the ultimate dedicated public servant."

With the passing of Mayor Lee, Board of Supervisors President London Breed became acting mayor. A special election to fill the rest of Lee's term that ends in January 2020 is scheduled for June 5. Declared candidates for the special election include former State Senator and Supervisor Mark Leno, former Supervisor Angela Alioto, current Supervisor Jane Kim and several others. Breed also announced her candidacy.

Unless the Supervisors choose an interim mayor, Breed will serve as both president of the Board of Supervisors and mayor until after the June 5 election. Dean Preston, who ran against Breed in 2016, called on City Attorney Dennis Herrera to rule on whether Breed can act as both mayor and supervisor, but no action has been taken.

"Mayor Lee lived a life of service," Breed said. "The son of working-class immigrants, Mayor Lee developed – early on – a profound sense of community and a commitment to helping others. Whether he was advocating for the powerless or serving as a voice for the overlooked, he was, from the dawn of his career, someone who fought for those in need before himself. That commitment to others defined the Mayor's three decades of public service. What mattered most to Mayor Lee was helping his fellow San Franciscans, and everyone who had the pleasure of working with Mayor Lee will miss him tremendously.

"Mayor Lee earned our affection, because he was one of the sweetest and most fair men any of us have ever known."