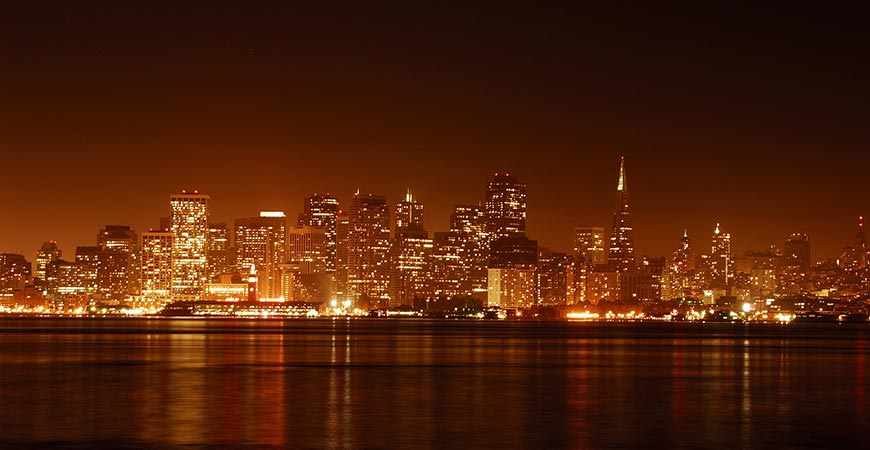 San Francisco keeps growing and changing and defining itself as a world-class city in the 21st Century. From the Salesforce Tower to the Transbay Transit Center, the future is now. But that future is for the many, not just the few, as our list of the Best Projects of 2017 can attest. And some are even firmly rooted in the past. 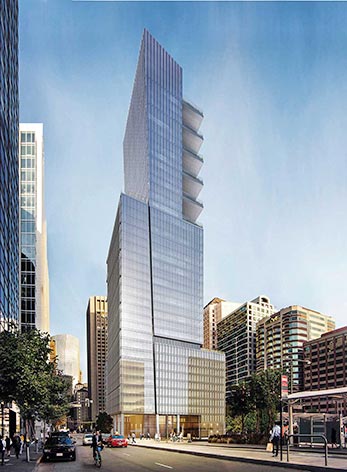 Scheduled for completion in late 2018, the 43-story, 605 feet Park Tower office space at Transbay will feature 14 sky decks and bay views from 70% of its floors. With proximity to both the Transbay Terminal and City Park, Park Tower is being built under a PLA requested by the developer, which values their effectiveness. The project is a joint venture of the John Buck Company and Golub and Company, who bought the site for $172.5 million from San Francisco’s Office of Community Investment and Infrastructure, the successor to the Redevelopment Agency that oversees the development of the Transbay District. 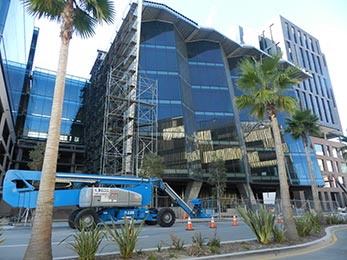 The Exchange is considered an excellent example of how private work in the former Redevelopment area has continued to produce productive outcomes both for the City and for the Trades. The $570 million, 736,000 square foot office project features two 12-story towers, two 6-story podiums and a 5-story parking structure. In mid-October, Kilroy Realty leased the entire office complex to the file-sharing and storage tech company Dropbox – the largest Class-A commercial lease ever signed in San Francisco. 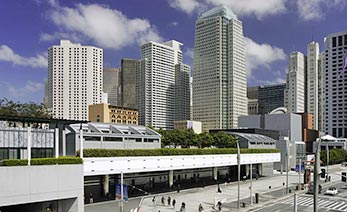 San Francisco’s iconic center is nearing the end of an expansion which is designed to keep San Francisco positioned as one of the nation’s great convention cities as well as boost the city’s hotel tax revenue and create more than 3,400 permanent new jobs. A 200,000 square foot structure at Third and Howard Streets opened in September in time to host a 30,000 person gathering of the GSMA Mobile World conference. The remainder of the center’s $551 million expansion is on track to be completed by December of 2018. 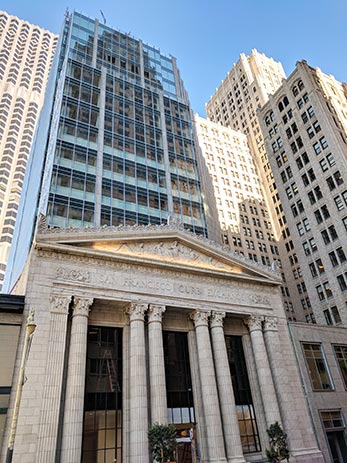 These two developments are the first major projects in many years in the traditional Financial District. 350 Bush St. is a 19-story, 360,000-square-foot office building that deftly honors the historic (1923) Miners’ Exchange Building terra cotta façade. The architectural firm who designed 350 Bush St. is Heller Manus, which also designed 181 Fremont and 505 Brannan. The office building is near completion. The more modest 500 Pine St. is a nearby five-story, 56,000 square foot office/retail development. 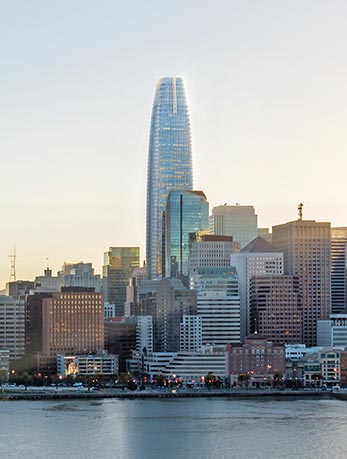 Although it is not yet open, Salesforce Tower is already the tallest building not only in San Francisco, but also the tallest office building on the entire West Coast. Sitting immediately adjacent to the Transbay Terminal, Salesforce Tower will boast floor-to-ceiling windows that provide a 360-degree view of the city. The structure tops out at 1,070 feet with elevators that can whisk visitors up to the top of the 61st floor in under 60 seconds. Slated to open in early 2018, the Salesforce Tower will define the skyline of the City for generations. 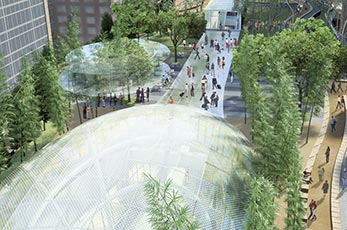 Wiring delays have pushed the opening of this landmark project into the late spring or early summer of 2018 when the first buses will roll in. Once completed, the $2.2 billion Transbay Transit Center will be a key to the City’s future, particularly after a route is finalized and funding secured for the downtown extension underground of Caltrain and eventual high-speed rail between San Francisco and Los Angeles. When it opens, the terminal will serve 11 different transportation systems. The center will also include more than 100,000 square feet of retail and a 5.4 acre rooftop park. 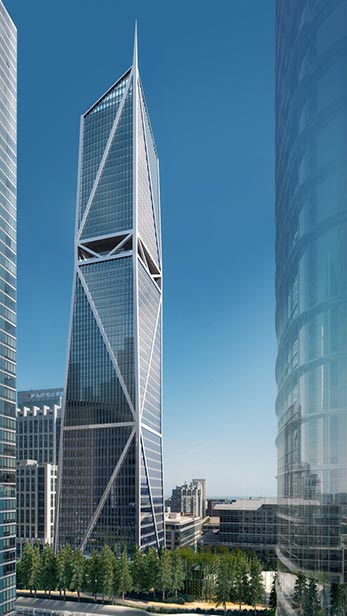 An architecturally striking companion to the nearby Salesforce Tower, Park 181 is destined to be a city landmark. The structure is being billed as the tallest residential tower west of the Mississippi River and also one of the most luxurious building on the West Coast. Facebook has taken up residence, leasing 436,000 square feet, and in March, the building’s penthouse went on the market for a cool $42 million. Standing at 70 stories and over 800 feet, 181 Fremont will be mixed-use with 67 residential units on the upper 17 floors. 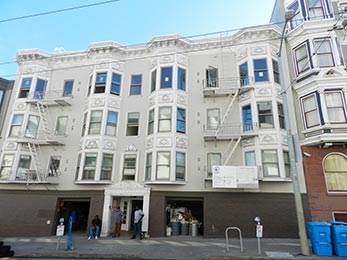 The federal Rental Assistance Demonstration (RAD) program will provide $1.69 billion in funds to San Francisco for public housing, rehabbing or constructing more than 4,500 units. RAD is the voluntary, permanent conversion of public housing to the Section 8 housing program. The program guarantees strong tenant protections that tenants – including the elderly, the poor and the working poor - had under the public housing program. The work is being done under an historic PLA between the San Francisco Housing Authority the Building Trades and is part of a pioneering approach to rehabilitation of public housing. Phase 2, the conversion of 14 properties with 2,066 existing units, is expected to be completed by December of 2019. 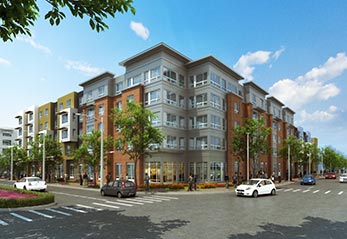 The Alice Griffith Apartments development is an example of the trades’ work in service in the city’s southeast communities. The SFHDC and MBS partnered on this five-story housing redevelopment in the Bayview geared to low-income families.

The two hospitals, a joint venture between general contractors Herrero and BOLDT (HerreroBOLDT), are moving toward a scheduled opening in early 2019. Employing hundreds of Building Trades members under a highly successful project labor agreement, the two California Pacific Medical Center campuses - one at the corner of Van Ness Ave. and Geary Blvd. in Cathedral Hill and the other in the Mission District – are driven by a state mandate requiring hospitals to meet stricter earthquake safety standards. They will be the first facilities in the United States to use seismic “viscous wall dampers.” The new St. Luke’s building will boast 120 beds; and the 12-story, $2.1 billion, 740,000 square-foot Van Ness and Geary campus will ultimately provide 274 patient beds. Additionally, a $168 million, 253,000 square foot medical office building across Van Ness from the hospital at Geary will be connected to the hospital via an underground pedestrian walkway. It is also scheduled to open in 2019.