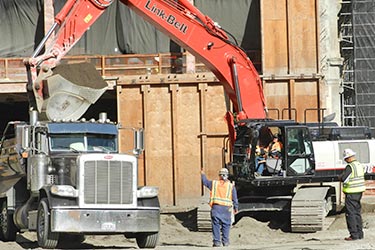 As part of its project at 706 Mission St., Webcor will rehab the 10-story Aronson Building, the approximately 120,000-square-foot structure built in 1903 that survived the 1906 earthquake and fire and the 1989 Loma Prieta earthquake. - Photo by Paul Burton

Webcor Builders is the general contractor for the project at 706 Mission Street that will feature a 43-story, 480-foot tall residential tower with approximately 146 condominium units. The condo tower will also be connected to the historic 10-story Aronson Building on the corner of Mission and Third streets that will also contain luxury condominium units. Webcor will rehab the approximately 120,000-square-foot building built in 1903 that survived the 1906 earthquake and fire and the 1989 Loma Prieta earthquake. Crews are currently doing interior demolition work and exterior renovations there.

The Mexican Museum, which had been seeking a new home since 2006, will occupy 60,000 square feet on the first four floors of the new tower. Former Mayor Willie Brown’s administration had promised the museum would have a new home near Yerba Buena Gardens; it will also be adjacent to Jessie Square Plaza and the Contemporary Jewish Museum. A project description on Webcor’s website noted that the museum and condo tower “will become the final development piece to complete the Yerba Buena Area Plan and cultural center fronting Jessie Square.”

The project was long delayed, in part, because residents of the Four Seasons Hotel and Residences across from the tower on Market Street objected to the height of the tower and the shadows it will cast on their building. Developer Millennium Partners and opponents reached an agreement early last year that enabled the project to move forward and break ground. Millennium Partners will contribute $100,000 for street improvements as part of an agreement.

Crews of Operating Engineers and Laborers with union subcontractors Malcolm Drilling and Silverado are currently working on excavation, shoring, and underpinning for the tower. Developer Millennium Partners redesigned the foundation of the tower to address concerns about the building sinking or shifting as the developer’s nearby 58-story Millennium Tower at 301 Mission has done. The Millennium Tower has a concrete slab foundation with piles driven 60 to 80 feet deep.

Millennium Partners spokesman P.J. Johnston said in the statement, “We decided to install an additional boring in early October [2016] to sample and further analyze the existing soil conditions at very low below-grade depths – up to about 300 feet below the surface. Any foundation design elements that are recommended by the 706 Mission St. engineers and consultants, and that we ultimately pursue, must account for the unique soil conditions at this specific site, as would be appropriate for any building anywhere in the city.”

Handel Architects is the main architect for the tower, and is collaborating with Page & Turnbull on the restoration and rehabilitation of the Aronson Building. Mexican architectural firm TEN Arquitectos designed the museum with A+D Architecture and Design and Pfau Long Architecture. The project is designed to meet requirements for LEED Silver certification.

The luxury condo project does not include below-market rate units but Millennium Partners will pay a $5 million fee to the City’s fund for affordable housing development.

The contractor and developer are also prioritizing local hiring and contracting with small business enterprises.

Construction began in mid-2016 and is expected to take 36 months and be completed by early 2019.