100 Hooper Tops Off in SOMA District 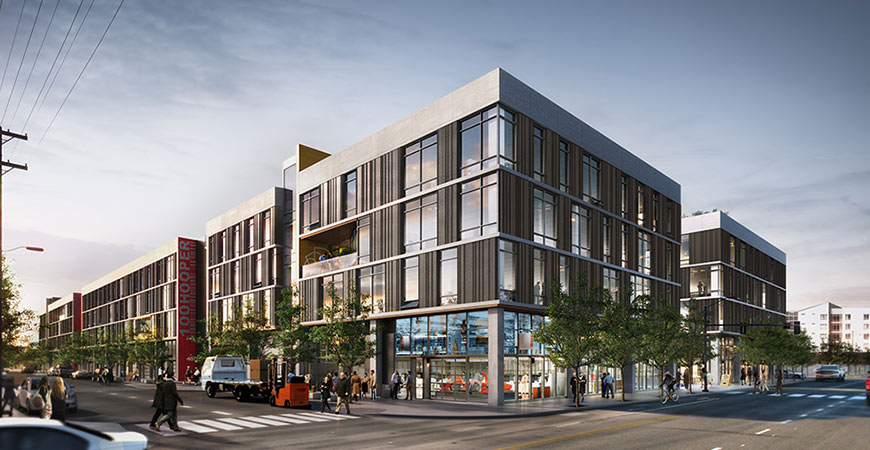 Once completed, 100 Hooper will be made up of two, four-story buildings in the SOMA district near Mission Bay. - Image Courtesy Kilroy Realty

DPR Construction is the general contractor for Kilroy Realty's mixed-use office and industrial complex at 100 Hooper, located in the SOMA district near Mission Bay. The $270 million, 400,000 square foot project designed by FORGE and Pfau Long Architecture features two four-story buildings with 311,000-square-feet of office space on the upper levels and 86,000-square-feet of light industrial space on the ground floor.

Kilroy broke ground on the project in November 2016 and crews topped off the buildings in mid-October 2017. The developer described the project as "a micro community of progressive thinkers and skilled makers connected by sky-bridges and common goals." The office spaces feature "design details that reflect traditional manufacturing, including exposed structures for open offices, steel bridges used as flexible spaces to interconnect floors and adjacent buildings, as well as the outdoor conference rooms and open collaboration spaces," according to a press release from Kilroy. 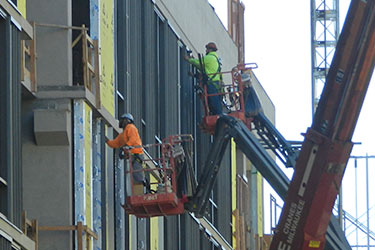 Union subcontractors on the all-union project include Rosendin Electric, Acco Engineering for mechanical systems, Alamillo Rebar, Capitol Glass, Otis Elevator, and Cosco Fire. Construction is on schedule to be completed by the summer of 2018.

The developer pre-leased the majority of the office space to Adobe, with the ground floor Production, Distribution and Repair (PDR) space designed for "innovators, inventors and craftspeople" performing design, manufacturing, production and related activities.

The San Francisco Chronicle reported on Kilroy's acquisition of the 100 Hooper site in 2015, noting that, "The deal comes as San Francisco is seeing a revival in companies that manufacture products ranging from bike accessories to LED lighting fixtures, custom shoes to gourmet popcorn, skin creams to luggage. Since it started in 2005 with a few dozen members, SFMade has exploded to 602 companies." SFMade is a San Francisco non-profit that promotes development of the local manufacturing sector. The Chronicle reported that, "The 100 Hooper agreement was driven by legislation that Supervisor Malia Cohen passed last year that relaxes zoning restrictions in industrial areas for projects with one-third industrial space."

"100 Hooper represents a truly innovative environment, offering both creative office space and production space under one roof," said Rick Buziak, Senior Vice President at Kilroy. "The interplay between office and manufacturing space with plentiful outdoor space makes this one of the most unique campuses in the area. With 100 Hooper, Kilroy embraces the diverse economy of San Francisco."

Kilroy Realty is also the developer of The Exchange located near 100 Hooper on 16th Street in Mission Bay, as well as the Flower Mart, 333 Brannan Street, and 350 Mission.

"It's exciting being a part of a one of kind project that brings local manufacturing and office space together in San Francisco," said DPR's project manager, Jeremy Bartle. "We have a passion to support local San Francisco businesses and culture and this site exemplifies that."