Rate of The Exchange Work is Progressing 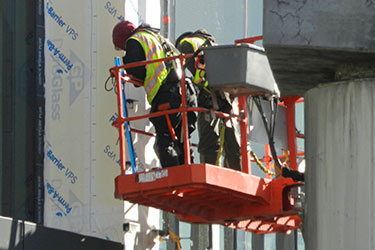 Work on Kilroy Realty's office project at 16th and Owens in Mission Bay, The Exchange, is progressing on schedule, with union signatory contractor Hathaway Dinwiddie as general contractor. The $570 million project will have 736,000 square feet of Class A office space and 14,000 square feet of ground level retail space. The project includes two 12-story towers, two 6-story podiums, and a 262,000 square foot, 5-story parking structure on the 3.5 acre site.

Kilroy Realty broke ground on the project in October 2015. Work on the project is done under terms of a project labor agreement that covers projects in Mission Bay from the time it was a redevelopment area.

"The Exchange is a project about creative workspace for the modern technological age," Kilroy Realty CEO John Kilroy said. "With easy freeway access, ample public transportation and numerous residential and retail options within walking or cycling distance, The Exchange sits at the intersection of high-tech industry and dynamic locale."

Cost of The Exchange

The Exchange, and Kilroy's nearby 100 Hooper complex, are part of the ongoing boom in office construction in the city. The San Francisco Chronicle reported in August 2016 that, "After a six-month period during which it seemed as if demand for tech office space had stalled out, fast-growing companies are once again fanning out across the city in search of space, according to developers and brokerage firms…. Tech tenants are in the market for 5.9 million square feet, while biotech firms are looking for 2.5 million square feet…"

According to the Chronicle, "San Francisco has about 5 million square feet of office space under construction, of which roughly half is leased." The newspaper noted that Kilroy Realty "has been the most aggressive builder of office space over the past five years."

In mid-October, Kilroy leased the entire, office complex to the file sharing and storage tech company Dropbox—the largest Class-A commercial lease ever signed in San Francisco, according to press reports. Kilroy announced that Dropbox would move into the office in three phases starting in the fourth quarter of 2018 through the fourth quarter of 2019. Dropbox already leases 182,000 square feet at Kilroy's 333 Brannan Street office building and 115,000 square feet at 345 Brannan. The company has over 1,500 employees in San Francisco.