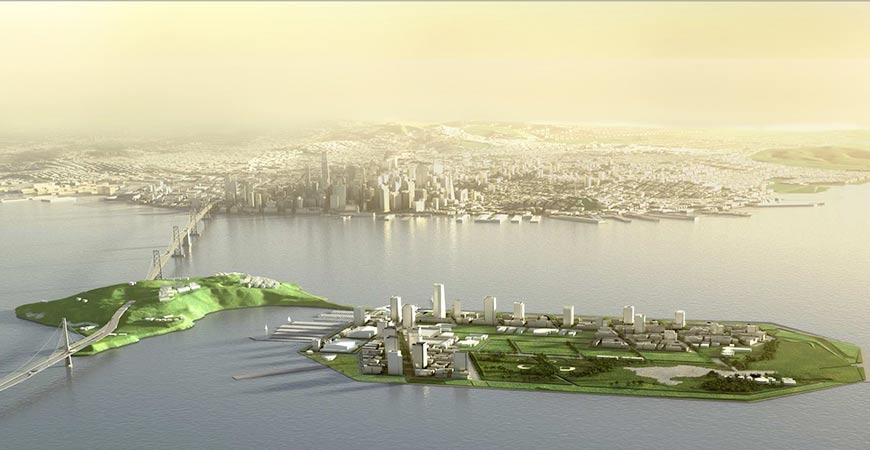 Several projects are underway on Treasure Island and Yerba Buena Island this fall that will create and strengthen the foundation for the construction of new homes, hotels and retail spaces that will be built over the next 10 to 15 years. A joint venture of Lennar Corporation, Wilson Meany, Stockbridge Real Estate Funds and Kenwood Investments is developing the dense, mixed-use project they call "one of the most environmentally sustainable development plans in US history."

The $1.5 billion Treasure Island/Yerba Buena Island redevelopment will create a new commercial town center and neighborhood with 8,000 residential units, three hotels and 300 acres of parks and open space. Approximately 235,000 square feet of retail space, 100,000 square feet of new office space, a new ferry terminal, upgraded roads and infrastructure will also be developed. The development is expected to generate 2,000 construction jobs annually and 3,000 permanent jobs, with 50 percent of the jobs targeted for San Franciscans and 25 percent targeted to low income or formerly homeless San Franciscans. Work is covered by a Project Labor Agreement between the developers and building trades unions. 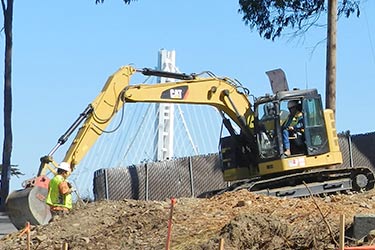 Before vertical improvements begin in early 2019 on Treasure Island and Yerba Buena Island, contractors must complete geotechnical stabilization work, which involves several different processes designed to prevent buildings, utilities and infrastructure from settling, and to mitigate or prevent liquefaction. - Photo by Paul Burton

Union signatory contractor DeSilva Gates Construction is the general contractor for Yerba Buena Island infrastructure improvements, water tank installation which started this summer and will continue until mid-2019, and infrastructure and geotechnical work in Treasure Island.

The geotechnical stabilization work involves several different processes designed to prevent buildings, utilities and infrastructure from settling, and to mitigate or prevent liquefaction. A February 2012 report by Oakland-based Architects Architectural Dimensions on conditions at the Oakland Army Base noted that, "These infill soils, from Bay dredging, are very susceptible to liquefaction during a seismic event when ground water mixes into the sandy soils making them semi-liquid, thus unstable to sustain loads from buildings – causing unpredictable damage." Treasure Island was built up with a similar mix of sand and "Bay mud" – silt dredged from the Bay – in the 1930s on top of a shoal jutting out from the northwest end of Yerba Buena Island,

DeSilva Gates Construction's Senior Project Manager Mike Llamas said different types of geotechnical processes will be used on Treasure Island, based on the location, conditions, and type of soil. Vibratory compaction is used to consolidate layers of sand, which are approximately 45 feet deep in parts of the island where housing will be built.

Deep dynamic compaction (DDC) will also be used to compress the layers of sand and silt. The process involves dropping large steel weights from a crawler crane along a grid pattern. The process compacts the sand and Bay mud layers so they will not liquefy and can sustain buildings.

DeSilva Gates PM Mike Llamas said "surcharging" will also be used to compact the layers of Bay mud. He said the surcharging process stacks material on top of the surfaces after they are compacted with vibra-compacting or DDC. The weight of the pile of dirt helps speed up the process of compressing the softer silt and sand. A huge mound of dirt in the middle of the island will be moved around as the other earth compacting processes are completed. "The piles of material go from 6 to 24 feet high," Llamas said. As the surcharge load is moved and earth is compressed, any water that is present is removed through a wick drain process.

The soil compacting / geotechnical work will take about two years, Llamas said. Deep soil mixing will also be used on the perimeter of the island to shore it up. The island's exterior and interior will be built up to three feet above the high tide line. "It is designed to account for sea level rise, but can also be raised more," Wilson Meany's senior development manager Kheay Loke told Organized Labor last year. He said the perimeter levee could be raised up to seven feet higher than the Treasure Island surface.

While the first phases of the development are underway, contractors working for the U.S. Navy are working on remediation measures to remove hazardous materials dumped there by the military over several decades.

DeSilva Gates, based in Dublin, specializes in Heavy, Highway and Civil Engineering Construction and has done major projects in the San Francisco Bay Area, Sacramento valley, and San Joaquin Valley. The company has as many as 1,000 employees during peak construction times, with a fleet of over 50 graders, 45 compactors, 60 dozers, 20 loaders, 36 excavators, 95 scrapers, 8 asphalt paving machines and 40 rollers. DeSilva Gates also performs environmental remediation work, including on Treasure island, through its affiliated company, Pacific States Environmental Contractors.

Mike Llamas said there are no other subcontractors for DeSilva's work yet, as the projects have not yet gone out to bid. Small crews of Operating Engineers and Laborers are working on the DeSilva Gates projects now. Llamas said all the subs will be union.