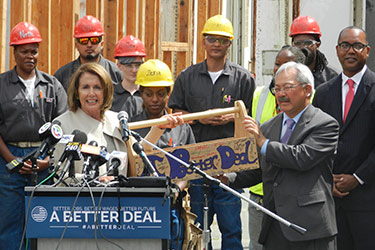 CityBuild students and graduates gave Pelosi a tour of the facility and showed off some of the skills learned at the comprehensive pre-apprenticeship and construction administration training program based at City College of San Francisco's Evans campus. CityBuild began in 2006 as an effort to coordinate city-wide construction training and employment programs and is administered by Office of Economic and Workforce Development in partnership with CCSF, community non-profit organizations, labor unions, and industry employers.

The Democrats' plan for A Better Deal unveiled in July would create "millions of good-paying, full-time jobs by directly investing in our crumbling infrastructure and prioritizing small business and entrepreneurs, instead of giving tax breaks to special interests," according to a description on Pelosi's website. A Better Deal also seeks to "build an economy that gives working Americans the tools to succeed in the 21st Century" and provide new tax incentives to employers that invest in workforce training and education.

"Nothing is more important than the education of our people," Pelosi said. "It's great to see the training CityBuild provides at CCSF – it gives me ammunition to go back to D.C. and advocate for workforce training."

San Francisco Mayor Ed Lee said he had taken office during the recession, and that Congresswoman Pelosi's successful efforts to get federal funding for the Transbay Terminal construction through the American Recovery and Reinvestment Act "was a very big deal" that created hundreds of jobs.

"We have to keep pushing the agenda," Lee said, for investing in job creation and training. "When people can take care of their families, have a career path, get the education and support that they need, have a changing career like our veterans who come back to City College – then they can have a better future.

"San Francisco is a unique city that leads with love and compassion," Lee added. "We set an example for the rest of the country with this partnership between CCSF, unions, and businesses."

Several City Build students and graduates shared their stories with Pelosi of how CityBuild training had given them skills, knowledge and confidence to succeed in their careers.

CityBuild Graduate Zena Johnson, 26, said she had learned about tile setting, carpentry, drywall installation and painting as a City Build student and was excited to learn more and apply her interest in art to a career as a tile-setter.

"CityBuild changed the way I see my future," Johnson said. "I see myself with a steady career doing something I enjoy. I would recommend CBA because they are here to help you learn how to use different tools, do the job right, and understand math and blueprint reading. They also open your eyes to so many different trades and get you job ready." Johnson noted that, "Construction is male-dominated, so doing everything that men do has built my confidence."

CityBuild graduate Meganne Pryor thanked CityBuild instructors for pushing her to get to work early and work hard, and showing how to be successful in a construction career.

"CityBuild has helped me join the Operators union and accomplish so many goals that I set for myself. I'm now in the position to purchase my first home, I have full health and dental and good wages so I can support myself and my family," Pryor said.

Antoinette McCallister, a 51-year old formerly incarcerated CityBuild student said the program "Has given me the opportunity to get up in the morning, have a purpose, learn new skills, and learn about all the trades so I can pick one I am interested in for a career."

McCallister said she was born in the Bayview and is now an example of someone from public housing working on local housing construction projects.

Thanking the CityBuild students, Pelosi said, "As we go into the weekend of Labor Day, it is privilege to be here to celebrate a vital organization that understands the value of American workers. CityBuild. City Build has created a path to good-paying jobs for thousands of hard-working Americans. CityBuild changes lives. It strengthens families. It creates healthier communities and a bigger middle class. I was so proud to see so many of our friends from the trades here because our middle class in America has a union label on it and is essential to our democracy."

Pelosi said A Better Deal "is our commitment to the hard-working men and women who have felt left out and left behind for so long. A Better Deal is our promise to tilt the playing field back on the side of American workers. We commit to creating jobs and raising incomes for American workers—by creating good-paying jobs; we are committing to 10 million more jobs in the next five years." Pelosi outlined some of the other parts of A Better Deal that include lowering the cost of prescription drugs and cracking down on monopolies that have driven up prescription drugs prices for consumers, workers, and small business as well as protecting pensions, Social Security and Medicare.

A Better Deal would give every American the tools to succeed in the 21st century, Pelosi said, with work-based learning, including apprenticeships, community colleges, and paid on-the-job training. CityBuild students gave the Congresswoman a toolbox made by students with "A Better Deal" painted on the side. "And now today we're getting as a gift this is a toolkit by the students here which I will display with great pride in the Capitol of the United States," Pelosi said. "What's great about it is it is part of our Better Deal has been a toolkit for the future and you made it right here. You have all the makings, whether it's learning the skills, appreciating the safety factors, understanding the routine of showing up on time and all the rest of it and the commitment to yourself to reach your own aspirations; that's what this toolkit will contain for me forever. So come see me there and you'll see your good work displayed for everyone else that visits the capitol as well." Pelosi said one of the reasons she wants to display the toolkit in the Capitol is because it shows a commitment to the CityBuild students. "They are making a commitment, their own personal commitment which is the biggest commitment of all," she said.

Answering questions from the media, Pelosi expanded on her comment that "the middle class in America has a union label on it," saying, "By that, I mean historically and in the present. Historically, we would not have a 40-hour work week, we wouldn't have an expression called 'the weekend,' the eight hour day, overtime, OSHA [Occupational Safety and Health Administration], NLRB [National Labor Relations Board], respecting the rights of workers, collective bargaining… the work of organizers in the early part of the last century and all through it and after World War II as well were very constructive in building the middle class. It just simply would not exist without organized labor in our country. That goes on now because we have to fight those who want to eliminate collective bargaining, repeal OSHA, diminish the work protections that OSHA provides, the negotiation ability of the National Labor Relations Board and the rest. So when we support labor, we support all workers whether they belong to a labor union or not because in lifting up organized labor, we are lifting up all workers as well."