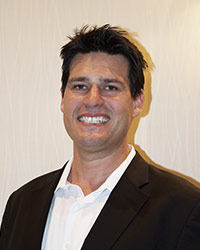 Laborers Local 261 member and former labor representative Joshua Arce took over as the new director of San Francisco's CityBuild program on September 11. Arce will bring experience from his background as a civil rights attorney and affordable housing advocate to the position, leading efforts in construction training coordination.

In 2005, he founded Brightline Defense, a nonprofit that promotes environmental justice for low-income communities, which he ran until 2014.

"I've worked with CityBuild beginning in 2007 as a civil rights attorney, community advocate and finally as a labor representative for the Laborers 261," said Arce. "I'm still a card carrying member. San Francisco has historically been a very pro-labor city, but there's always more that can be done. We really need to focus on partnerships with organized labor, and work to break the cycle of poverty and income disparities."

Arce was part of the effort to shut down the old Potrero Power Plant to curb pollution in San Francisco's neighborhoods. As power was being shut off, he realized that the impact would be acutely felt by workers of the plant rendered jobless. Arce spoke of devoting his efforts to help local communities effectively transition from a polluting economy to a clean economy in a way that creates strong union jobs. He views CityBuild as the primary effort to invest in workforce development by identifying and training job seekers from disadvantaged communities.

"The opportunities of our booming economy also create challenges," Arce commented. "This year, what I think about the most for the City and County of San Francisco is how we can make sure that we've left no one behind who may still be unemployed. It's about building housing and infrastructure and continuing to add value to employment."

Arce cited the citywide Project Labor Agreement being considered by the Board of Supervisors as vital to supporting workers and creating pathways to the middle class. Looking forward, he wants CityBuild to be a program that other cities emulate as a fulfillment of collaborative partnerships between community-based organizations and job seekers. Arce spoke highly of former District 10 Supervisor Sophie Maxwell, who led the efforts to create CityBuild. Earlier in her career, Maxwell had been a union electrical apprentice who worked for the Southern Pacific Railroad doing repair work on the electrical systems and trains. As Supervisor, she developed CityBuild as a way to support unemployed residents through job training.

"I think Josh will continue to have support from community based organizations — that's where your people come from," Maxwell said. "As long as you have that base, you will have people behind you."

Maxwell sees San Francisco at a crossroads in terms of transformative changes and decision making to guide those changes. She hopes that CityBuild will work to prepare people to thrive in the new economy that's emerging with technology like self-driving cars, robots that can hang sheet rock and 3D printers increasingly used in construction.