There’s Only One Way to Vote for Union Construction of Truly Affordable Housing in SF: Yes on Prop E, No on Prop D

We don’t have to look far to see the impacts of the housing crisis in San Francisco.

We see it every day in our own networks as friends, family, and coworkers move out of our city. We see it with rising homelessness, which contributes to the crisis on our streets. We see it with construction workers sitting idle, waiting for housing projects to begin so we can finally get back to work after the hard Covid years.

While many factors have led to the housing crisis, it’s important that we do what we can to address the causes. One of the biggest ones is a long and drawn-out process to obtain the necessary approvals to move housing from a concept into concrete.

That was at the top of my mind when we began negotiations to put a measure on the November ballot to speed approvals so we could get our workers back to work.

The end result of that long process of collaboration and negotiation was Prop E. This worker-led initiative was truly a group effort, as we collaborated with partners at the Board of Supervisors, members of the development community, tenant and housing advocates, and many more people to create an initiative that would speed up the creation of housing while providing real benefits for our community.

Importantly for us, that housing must also be built with a certain number of skilled-and-trained workers. That way, we’re not just ensuring the production of high-quality housing —we’re also getting our members back to work.

Approved projects must break ground within two years because we need housing now. And we included more transparency and oversight because San Franciscans deserve to know how that money is being spent.

This is all fairly common-sense stuff. Developers save a lot of money through a speedier approval process, and we’re simply asking those who benefit to give a bit back to working people.

Yet, there is controversy on the ballot. A competing measure, Proposition D, also claims to offer affordable homes now. A close read of the initiative, however, reveals that isn’t the case.

Instead of the framework we created through careful deliberation, Prop D just adjusts the definition of affordable housing to be unaffordable for most San Francisco residents. It doesn’t include family housing or our skilled-and-trained provisions. It doesn’t require any new accountability — on the contrary, it eliminates public oversight.

I had hoped at the outset of negotiations that we Prop E proponents could come together with Prop D proponents and all of us get behind one unity measure. Yet, they chose to go it alone and pursue their own initiative. That’s their right. Now, it’s in the hands of the voters.

This council urges our members and all San Francisco voters to support Prop E as the truly innovative and comprehensive measure to speed up affordable housing production.

To learn more about Prop E, visit the campaign’s website at SFHomesforFamilies.com. There you can read more about the measure and learn about volunteer opportunities for voter education and outreach.

Let’s get back to work building housing workers can afford!

Who’s Been a Friend 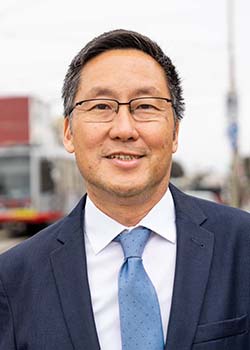 In November, incumbent Gordon Mar, a friend of the trades, is running for re-election as supervisor of District 4. He deserves our support.

This month’s friend of the trades is District 4 Supervisor Gordon Mar. From his early days as a labor organizer to his current role as an elected lawmaker, he has consistently used his influence to better the lives of working-class people.

Mar has kept working families front-and-center in his policy initiatives. He authored and won a paid sick leave ordinance and recall rights for vulnerable workers impacted by the pandemic. He cosponsored our wage theft prevention ordinance and has supported housing construction in his district — no easy feat considering it’s on the west side!

Mar truly walks the walk. He is an unyielding advocate for a skilled-and-trained workforce, prevailing wages, and apprentice opportunities with building trades unions. He rises above the hollow political rhetoric, opting instead for a thoughtful and constituent-driven approach to his votes. Even in a disagreement, he shows tact and models integrity.

I’m proud to call Gordon Mar a friend of the trades.