Looking With Skepticism at the Institutions Surrounding Us, and Asking Them — and Ourselves — the Tough Questions

Returning to Normal at SFUSD

As our local schools navigate the pandemic, inequities reveal themselves. Disparities in funding are becoming more obvious, as are the challenges of truly addressing today’s educational needs — both in terms of resourcing and modernizing the institutions in which our children spend their days and meeting the demand for vocational education with a pipeline to apprenticeship.

Often, these problems and shortfalls are left to wither on the vine while our children try to learn. The inaction seems to be due primarily to a simple lack of political will. The reactionary stances we’re increasingly seeing point to a woefully outmatched school board advised by a half-scared, half-incompetent executive management team.

Taken altogether, this could be a recipe for disaster, but is a costly recall really the answer? We’ll explore that further in future editions of Organized Labor. But for now, what we need first and foremost is a decent contract for facilities staff, plus leaders who will champion the cause of school modernization and staff retention. 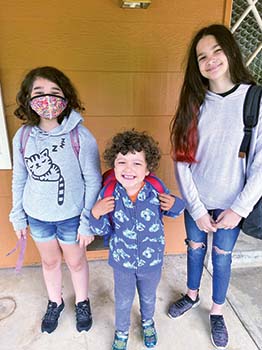 Rudy’s kids pose for a snapshot before they set out on their first day of the 2021-2022 school year.

Sometimes I wonder if the superintendent’s administration has given so much as a moment’s thought to the sheet metal worker, the carpenter, the electrician, the roofer, the ironworker, the teamster, or the laborer who, together, struggle to keep the basic physical infrastructure of San Francisco’s schools operational.

Suddenly, ventilation and facilities are hot topics. To us, to parents, and to the educators alongside whom we work, such issues were always key ingredients to a safe and supportive learning environment. And they remain so, now more than ever.

Is Amazon a friend to labor, or a foe? The e-commerce giant has certainly established a precedent that would suggest the answer is the latter; the company has never seemed particularly fond of our movement based on the way it treats its workers.

It’s clear Amazon is a company that needs to be pushed — and pushed hard — to admit to and correct its despicable labor record, from its inhospitable warehouse conditions to its dismissive (at best) treatment of employee hours, benefits, and more.

The company is now on its way to SF: Amazon purchased the old Recology property at 900 7th Street in December 2020, and, this past February, it submitted plans for a six-acre warehouse on the site.

Now that we’re seeing a threat to UPS jobs under the largest private-sector union contract in the United States, with 375,000 teamsters represented, we must ask ourselves: What is the cost of signing on to build with Amazon? Will this company be a good partner? Will it bring forward the same minimum bidder schemes, TI exclusions, and other concessions that we’ve seen used to attack our agreements? Or will it sign our standard PLA and try to buy off our trades while continuing to exploit warehouse and delivery workers and thwart unionization?

With a company like Amazon, it’s our duty as union people to ask some tough questions. It’s our duty to be skeptical and to view any potential work partnership with Amazon as more than just a one-off construction project. It’s our duty to ensure we aren’t helping to build infrastructure for the enemy of our movement, thereby strengthening it and enabling it to exploit our brothers, sisters, and siblings as soon as it sets up shop.

It doesn’t inspire confidence that Amazon just backed out of a deal in San Diego after that city considered a worker protection law requiring Amazon to raise wages and offer more safety training and sick days, according to a recent article in Vice. Both San Diego’s Building and Construction Trades and Labor councils pushed for the legislation, standing up for workers ranging from construction tradespeople to delivery drivers and the small businesses they support... and Amazon skipped town.

These fairly simple expectations were clearly too much for the third-biggest company in the world.

We must keep a close eye on Amazon as it moves into our city, and we must ask it — and ourselves — a lot of tough questions. The company’s presence in SF represents an ideology about the future of work, like it or not. We must do all we can to ensure that ideology matches with ours.