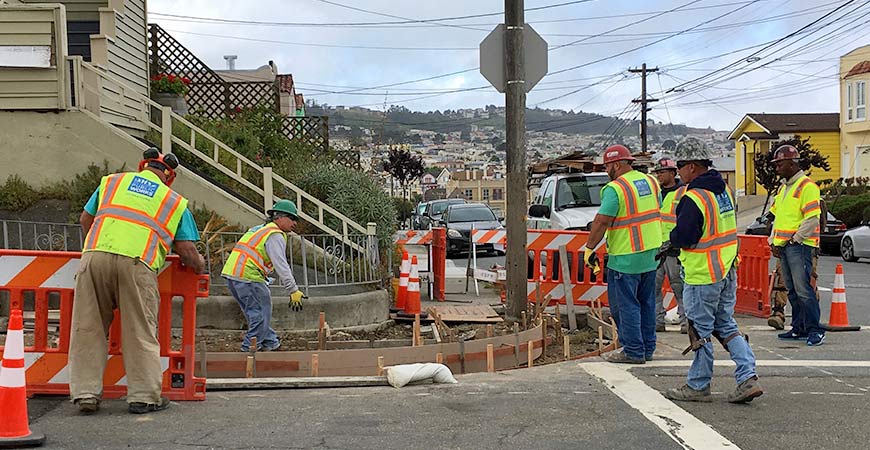 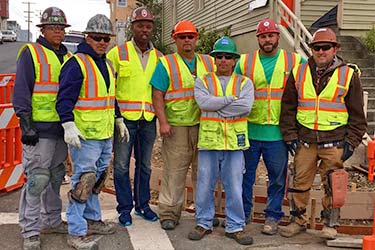 About 50 of Plasterers and Cement Masons Local 300's members work for the San Francisco Department of Public Works. With intensifying traffic congestion on the city's streets, many of those members have been tackling streetscape improvement projects all over the city to make conditions safer for pedestrians and commuters alike. Crews have been out in the midst of the rush hour bustle installing median-strip planters on Geneva Avenue, replacing the foundation of a failing section of curb in West Portal and getting sidewalks compliant with current ADA regulations in numerous places including Crocker-Amazon and the Sunset District. These projects not only keep things moving, they're also integral to enhancing the quality of life for residents with disabilities.

Organized Labor recently had the privilege of visiting several job sites and spoke with crew members about the unique challenges posed by each project. From hurried commuters whizzing by in their vehicles on Geneva Avenue, to pedestrians not heeding construction notices in the Sunset, safety was the foremost priority constantly on the minds of workers. With the daunting technical hurdles faced at the West Portal site, Dorchester Way was closed to traffic, allowing the crew a moment to appreciate a piece of San Francisco history that rested underfoot in the archaic brickwork laid during the turn of last century. 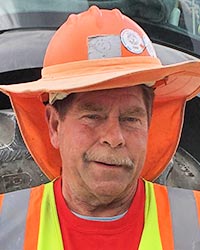 I've been with the cement shop for 20 years and I love my job. We're everywhere in the city, whether it's by the Ocean, the Bay, Transamerica Pyramid and all the way south to Candlestick Point. Every part of the city is growing and being developed and we're a part of it. We fix the things that need the most immediate attention and work to beautify the city.

For this project we're taking concrete out and putting something living back in so it can be a beautiful thing. Improving the center islands also helps with traffic calming. It gives me the opportunity to work with citizens and they're very thankful and happy that we're improving their neighborhood. They can see the improvement it makes and comment on what we're doing, so we get immediate feedback on the work. 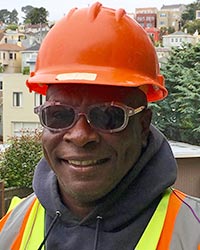 I was born into the Cement Masons, so I've been able to watch the changing times. My dad, Harry Jamerson, was the business agent for the Local 300 over 30 years ago. I've seen how things have progressed so I know about some of the nuances that others might not because I grew up going to union meetings and heard my dad talking about being part of a union.

Right now I'm helping with the saw cutting. I usually work on islands and barriers because San Francisco has a problem with speeding cars. These islands make drivers a bit more cautious, which gives pedestrians more protection. It's a good job and we've got good supervision. People have high expectations of the union and view it as a cure-all, but as my dad used to say, if you want to work you'll get a job, but it's up to you to bring the work ethic to the job. 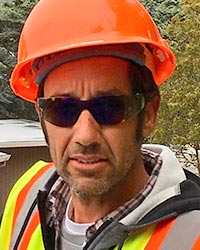 The hardest thing about this project is the infrastructure. There's a brick road underneath that's from the early 1900s; so being able to stabilize the foundation after removing the curb is going to be quite a task. That's where the engineering comes in. It's going to be meticulous because the infrastructure has really been compromised from erosion and the deterioration of the brick foundation. There's also a pipe running through the middle where they used to run water, possibly from Hetch Hetchy, which also undermines the whole foundation.

There are a lot of eyes on this, it's a high profile job. Everything we're doing is being overseen by the Mayor's Office and a neighborhood oversight committee. 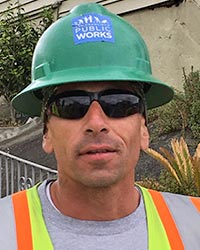 I'm originally from Arizona where there's a lot of flat land. The ADA ramp work can be challenging here because we're dealing with slopes and different elevations as well as tight areas around the homes. The lead man may be given a set of plans, but then it becomes clear that the plans won't work. So you have to take it upon yourself to step back and create something that will reach the slopes and elevations.

Working with the city allows us to be at ease and really focus on the details of a project. I love being able to interact with the community instead of being stuck on a big commercial job site. I'm not only here doing the labor but I'm also making sure that the pedestrians and homeowners are safe and happy. 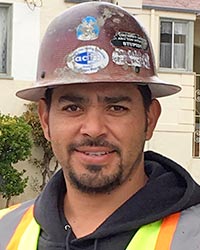 I've been with the Local for the past ten years and have worked for DPW for the past four years. It's a good job and I really like to be entertained by the numbers aspect of it. It creates a challenge for me and I enjoy that. These projects involve engineering work and making a lot of measurements. We have to be very exact, even a quarter of an inch can change things drastically. It makes things challenging but it's also what I love about the job.

I'm kind of a lead cement mason here so I pass on what I've learned to the newer guys. It feels good to be a mentor. I had started out as a laborer and switched to pile driver and then came to be a cement mason. This is what I love the most and am working with good people. 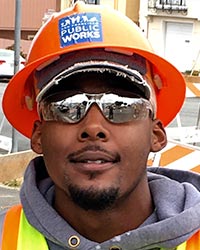 We've been working on a lot of ADA ramps. There are many places in the city that aren't ADA compliant. The challenge is getting the elevation and slopes to match with what's existing. Sometimes tree roots have caused the concrete to buckle, so we have to tear a lot of that out and lay it back down.

The apprenticeship program has been very good so far. It has given me a chance to see different parts of the city and get a different look into the construction trade. I used to work in plumbing and so this has given me the opportunity to experience something different. 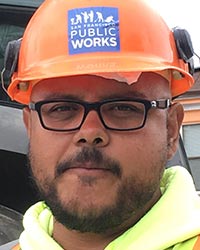 I love being a part of the Local because I'm always learning about many things I had no idea about before. Everywhere we go, we're surrounded by cement and I had always been curious about how things were built. I wanted to know what steps needed to be taken to get to the finished product. Being in the cement shop has opened my eyes and mind to a lot of new things whether it's job skills, filing paperwork or safety.

Safety is the biggest challenge with this project. It's a very busy intersection and cars just fly down the road. Good communication is the key factor as well as looking out for everyone.