Operating Engineers Local 3 - Surveyors and Inspectors at the Transbay Center 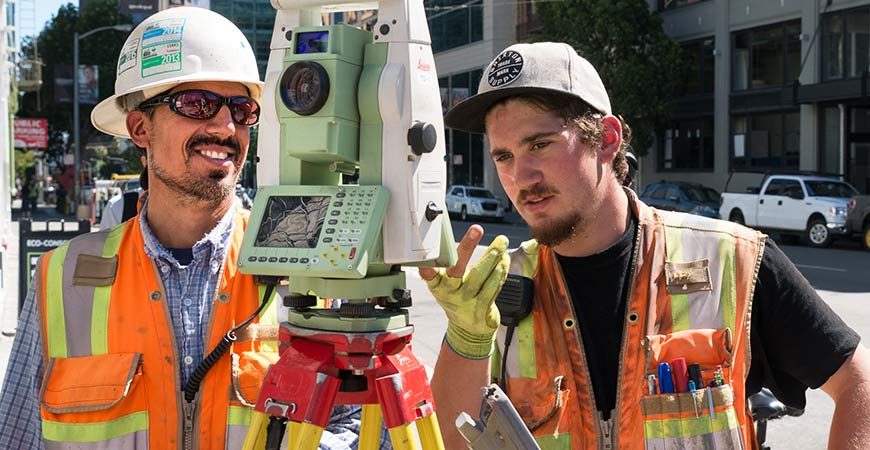 Eduardo Quevas and Randy Lubarsky - The exciting part about working with apprentices like Randy is that they are very motivated to learn and to do the work. The great thing about the building trades is that you learned from journeymen when you were an apprentice, and then you get to pass along what they taught you. You add to it all the things you learned during your years, so the apprentices won’t make the mistakes you made. -- Eduardo Quevas, Journeyman

The trick to being an inspector is not making any friends. People think if you’re their friend, you’re supposed to let them get away with stuff, and our job is to catch them. You gotta be all business. The bottom line is that you don’t want the building to fall down.

Today’s buildings are designed to withstand natural and even man-made disasters. To do that, they must be constructed to the engineers’ specifications. Inspectors and surveyors make sure that everything is constructed according to the approved design. Union members want to take pride in what they build and to know that they are contributing to public safety.

Although doing their job can sometimes lead to heated conversations, in the end the inspectors are appreciated for making sure the final project is something everyone can be proud of and that will serve the public for many generations.

We met with Operating Engineers Local 3 Inspectors and Surveyors at the Transbay Center working for Inspection Services, Inc. Smith-Emery, and Shimmick Construction. 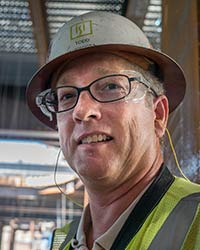 Time is money, and when contractors get into a bind they may try to do something quicker and cheaper than regulations require. As inspectors, we are here to make sure the public gets a safe, quality product by making sure everything conforms to the specifications listed in the plans. We take test samples of the soil, rebar, asphalt, and concrete which the lab tests to make sure everything is up to spec.

We test the soil for density and moisture content to make sure it will hold the structure. We go to the rebar yard before delivery and take samples, which we take to the lab to check the bend and tensile strength. After the rebar is installed we check its size, placement, and spacing. We have about a day to do that and make corrections before the concrete is poured.

The concrete is closely monitored and tested. When the delivery truck shows up, we start taking samples every 50-100 cubic yards (depending on the individual project specifications) as the mixture goes down the tailgate, before it goes into the hopper of the pump truck. We make cylinders which go to the lab for compression testing.

There are different specs and testing methods used for BART, Caltrans, airports, dams, schools, and hospitals. Hospitals have the toughest standards because we need to ensure that these buildings remain standing even after an 8.0 earthquake. If there’s an earthquake or other disaster, we’ll need the hospitals to take care of people. Engineers have been closely following the events that have happened in Japan, and the good news is that the way we are building things has changed and our structures should survive the inevitable large quake. 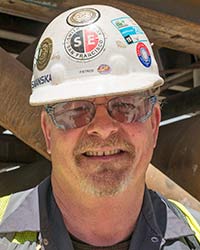 We look at the specs and make sure this job is going according to Hoyle. You got to come out here not expecting to make a friend, but have a decent working relationship, and that’s the best you can expect. If something more happens, that’s great.

You just explain the way it’s supposed to be done, and why it’s supposed to be done that way. In the beginning I had no idea what the “whys” were. The engineer says so and so and the code sort of says this. Now, after 35 years, I can tell them the reasoning behind it. “Hey, if you put the amperage that high you’ll burn up the stuff that gives ductility to the building.” They understand that a little better.

On this job we have casting, which you usually don’t run into. We had to run tests to figure out the welding procedures. We would try one type of heat and find that it was too high. The welds turned out too brittle. So then you turn things down, run it again, and this time maybe you don’t get the penetration you were looking for. So you try it again until you find a happy medium. You just watch the process, observe, and report. This project went really well. It took about a month’s worth of testing before we could get going. I’ve been on jobs where it took three or four months of testing before they could say, “We got it.”

I’ve been watching some of these guys weld for 20 or 30 years. Most of the workers on this job are good to work with and respect quality control. You build some camaraderie with all that, and hopefully it eventually leads to something. 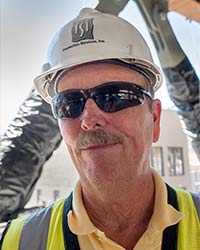 I coordinate the inspections on the site. The trick to this job is showing up early and leaving late so you can keep up with everything and stay ahead of the contractors. Up to this point it’s been mostly soils, then concrete and rebar, and now we’ve started doing the structural steel. We’ve got five inspectors out here doing structural steel during the day and we have additional inspectors for the night and swing shift, depending on what the contractors are doing. Things change on a daily and even an hourly basis. You have to be aware of what is going on and try to anticipate. Good verbal communication with the contractor helps a lot.

There’s always a tendency to cut some corners to meet the schedule, but our job is to keep them honest and make sure that everything is done correctly. There are times when you have disagreements, and that is to be expected, but most of the time we agree. At the end the day I think they appreciate what we are doing and that we make it all work. We keep things moving and on schedule.

This will probably be the signature job of my inspection career. The project is huge. I’ve been out here for almost four years and will probably be out here another two years. All your public transportation is going to come through here. They’ve built a train box below for high-speed rail and Muni. They made a provision at the other end of the site to go through a wall for a conveyance system to BART. Everything will be connected when it’s done. 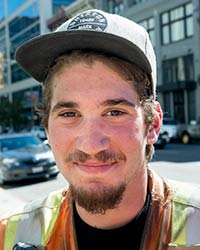 When I first started, I really didn’t know what I was doing. I was out there holding a rod, doing the very basics of survey work, learning how to run a level, how to set up your notes and whatnot. Then I got on the Bay Bridge and learned to read plans and do layout work. That was when I really got to know what was going on and felt like I was part of the job. Today we’re doing all the layouts and setting up benchmarks for the beams.

t’s been a great experience. When I started I was your normal 18-year-old. I didn’t know what I wanted to do with my life. I thought about becoming an engineer, but I didn’t have a place to go to school or a place to stay. Then I found this program. It’s been very grounding. I’m thankful for everything and for our union and for all the benefits and health care it provides, and for helping me grow as a man. 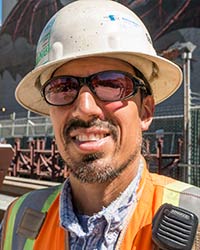 The benchmark or control points are given to us by a third-party surveying team and we also we have to make sure their information is correct and even double check them.

A lot of times things get modified. One time I made a mistake. Fortunately we caught it before they poured the concrete. It’s preferable not to make a mistake, but if you make one, it’s better to catch it before the concrete has been poured or the iron has been erected. 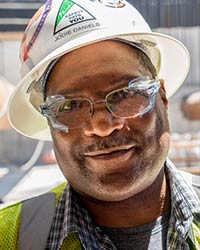 The trick to being an inspector is not making any friends. People think if you’re their friend, you’re supposed to let them get away with stuff, and our job is to catch them. You gotta be all business The bottom line is that you don’t want the building to fall down.

Today I’m doing bolt testing. We attach the bolt to a Skidmore testing machine and determine how many turns it takes until it reaches the required tension. If it snaps, it fails. We do tests on bolts of every size and from every lot delivered.

When they’re doing a connection, I have the plans in my phone, and I’ll check it and make sure the bolts are the right size. Then I have a field book that tells me that size bolt needs, say, 155 kips. A kip is a thousand pounds, so that means that bolt takes 155,000 pounds of torque to hold, and from the Skidmore test we know how many turns it will take.

I spent 25 years doing concrete and hurt my shoulder working on the bridge. I couldn’t do it any more. So I started taking classes. It’s a lot of book learning and test taking. The tests are harder than the job. Learning something new at an old age isn’t easy. I started the program when I was 53, and I’ll be 58 in October. I hope to be like my uncle. He worked until he was 80 finishing concrete.