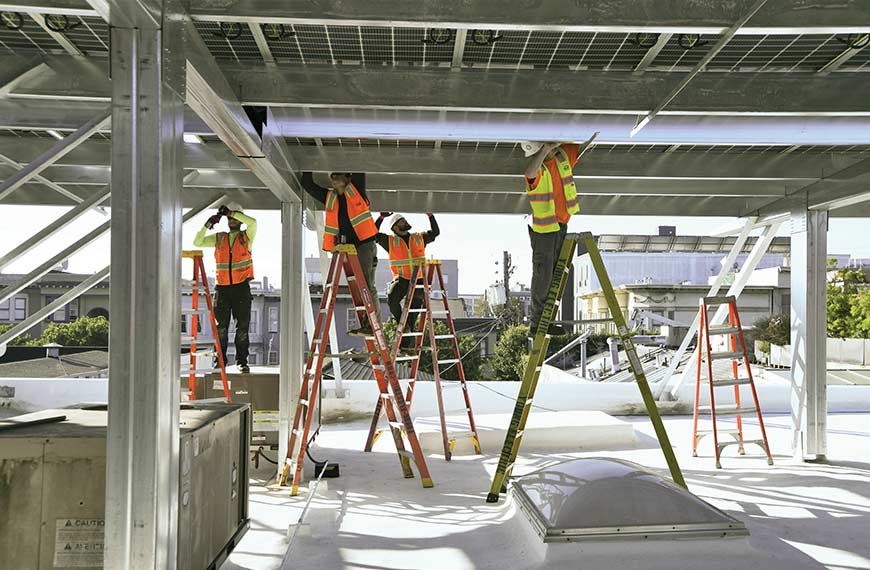 For the past couple of months, a small crew from IBEW Local 6 has been hard at work on a pioneering solar project in the heart of the City.

You’d have to crane your neck to catch a glimpse of them on the jobsite, though. That’s because the crew has been working up on a rooftop, installing an array of panels and building out an extensive solar system for long-standing San Francisco electrical contractor Young Electric and Communications’ headquarters in the Mission District.

This project is particularly unique because it cleverly yet simply solves a pair of problems that has traditionally made solar an impractical, if not impossible, option for the industrial rooftops of SF: a lack of available rooftop space due to HVAC and other roof-mounted mechanical units and city codes stipulating there must be clear rooftop pathways that provide sufficient access for first responders.

The solution? Move everything up. The crew has fabricated a fully elevated canopy structure and slapped it right on top of the roof. The panels are installed atop the canopy — well out of everyone’s way — which provides a high enough clearance to allow people to move comfortably beneath the array, therefore keeping the system compliant.

The expert electricians of Local 6 were hired by Young Electric, which partnered with Illinois-based solar integrator Day & Night Solar earlier this year to design the solar canopy and procure the materials, as well as lead construction on the project.

Once everything is finished up and plugged in, the system is set to generate 145.6 kilowatts of power.

We stopped by one sunny Thursday afternoon in October as the Local 6 crew was nearing finalization of the project to hear their thoughts on solar, as well as learn a little bit about them and their union experiences. 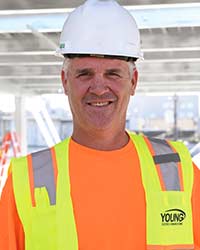 I got into the union when I took the test — I had friends in Local 6 who told me it was coming up. So, I went to City College, took the test, and got in. That was 1995. I’ve been happy to be a proud member of Local 6 for 26 years now, and the three guys here who are helping me out are doing an unbelievable job.

I think this work is cutting-edge. I think Wayne [Hule, president, CEO, and owner of Young Electric] got on top of this to be one of the first guys to do a job like this, and I think it’s the future. I think you’re going to see everything above the roof from now on because now, you don't have to strip all your [HVAC] units off the rooftop. You can put the beams in place and put the panels above them. This is a new way to go above those units and still have solar.

This is almost a whole brand-new field, for us, and we don’t really get to tap into it that often on the union side. I’ve done it at my house — I’m a big fan of solar. So, I think it’s great to be able to do it at our shop.

Being a union member has affected me beyond belief. I came from a non-union background, so being able to contribute to your pension and being able to have really, really good medical benefits has been just amazing for my family and me. 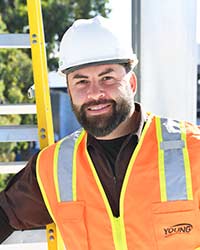 I joined the union through a bartending job I was working downtown — the electricians used to come in regularly. So, I decided to apply. I also have family members in union trades... plumbers, for the most part. So, the two kind of came together.

This is a great jobsite. I can see a lot of this work being part of the future, with solar, EV vehicles, and everything going electronic.

Being a union member has definitely given my life a lot of structure, which comes hand-in-hand with the trade. You need structure to be a successful electrician, and it teaches you a work ethic. It teaches you punctuality, how to work with other people, how to figure things out when you don’t have all the pieces of the puzzle. Local 6 has a good brotherhood. A lot of the members are tight, and there’s a very fraternal aspect to it. That’s one thing that really drew me to this trade. 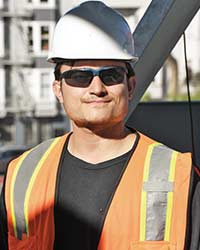 I got into union work through a recommendation by a family friend who was in the trade. In 2018, I interviewed for the union and got in.

This is definitely interesting work. I do believe that solar is the future, so it’s best to learn about it now.

As a union member, I like the fact that I’m able to work seven to eight hours a day and then go home and not have to worry about anything else. That’s a plus. I love the people I work with. My union brothers are some of the best people I’ve ever met. The trade itself is very interesting. I love learning this work as well as getting to go to spots I’ve never gone before. I’ve been inside multiple skyscrapers and never would have if it weren’t for this trade. 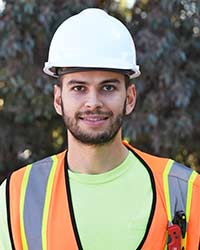 I got into doing union work through my dad. He’s been an electrician for almost 30 years now. My grandfather was a union electrician too, so I’m third-generation Local 6.

I think this job is great. Solar is something I’ve never done before, and now it’s something I can do in the future. It’s been cool working on the roof and out in the sunlight — that’s been nice.

Being a union electrician has been great. It’s provided a good, stable job for me working on something that we’re always going to need.