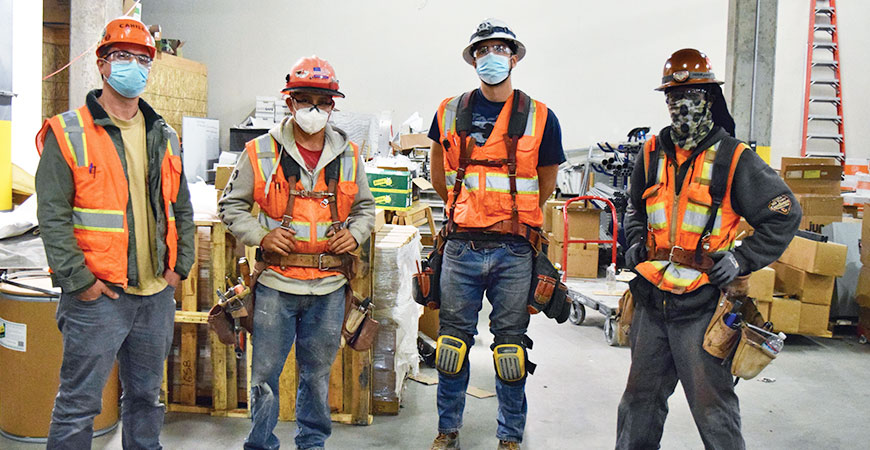 Local 22 Carpenters have been working on multiple projects in the Mission District, including a full remodel of KQED’s headquarters at 2601 Mariposa Street and a new home for the Mission Kids Co-op at 969 Treat Avenue. Local 22 members have been involved in the entire span of the KQED remodel, which began in September of 2019 and is expected to wrap-up in May of next year. The headquarters will host the network’s entire production and broadcasting spaces for both television and radio plus brand new administrative offices and reporting studios. Crews under general contractor Cahill, in addition to several subcontractors, have been tackling challenging aspects of the project and even added a new floor for a now five-story building. The project features more amenity spaces, a rooftop terrace, and a dramatic atrium off of Mariposa and Bryant streets.

A smaller crew of Local 22 Carpenters are building a new home for the Mission Kids Co-op at 969 Treat Avenue, which will provide much-needed affordable childcare within a two-story building. The Co-op will feature learning and play areas as well as outdoor recreational space. Guzman Construction is the general contractor. 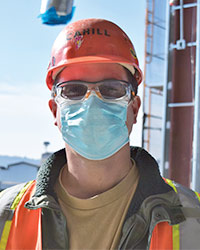 I’m also the warden of Local 22’s Executive Board. I’m very thankful that I’ve been a member and all the opportunities that have been provided to me. I feel like I owe the union a debt of gratitude and want to make sure that I stay active. I’ve made a point of going to meetings almost every month for the past ten years.

This KQED remodel is a unique project in that it has some really complicated structural components to it, like de-tensioning the post tension slabs, adding all the sheer walls into an existing building, adding a new floor onto an existing building and all the reinforcing that goes into the structure below is really challenging. There are a lot of detailed, high-end finishes that required a high-level of coordination. There’s a huge communications scope in this building so both the broadcast wiring and also the typical comms scope that we would have on a project like this are pretty extensive. Mechanically this is a complicated job because they have all these servers and equipment in the building with cooling needs that exceed what you would usually see in a building this size in this climate. It’s been complicated but also rewarding and it’s fun to see it all come together at the end. 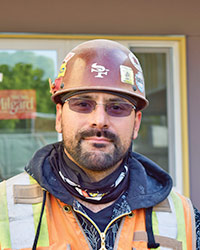 I have eight years under my belt as a Local 22 Carpenter. I had originally started out as a laborer and switched over to the carpenters as I have a few cousins that are brothers in the union. Before joining I had already known more or less what unions were all about — unions brought us the weekend.

I love this trade and wouldn’t change it for anything. I’ve been able to learn a lot thanks to other journeymen. I had the opportunity to work with a lot of good guys who wanted to instruct me instead of just throwing me in to either sink or swim.

I’ve been working on the Mission Kids Co-op for almost a year now. I feel fortunate to be working on this job because it has allowed me to work on every aspect. I did the layout for the footings and then did the footings. I did the cement and after it formed up, I did the layout for the framing. I’ve learned more on this job than any on other because we had to start from scratch. I’m doing more of the layout and learning more about blueprints, which is an important part of the whole job. I’ll be able apply what I’ve learned here in future work. 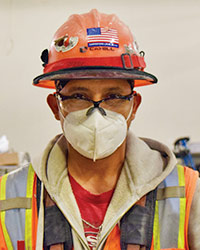 I’ve been with Local 22 for nearly five years. I’ve worked for Cahill for 15 years and belonged to a different union for part of that time. I had been with the Laborers 261 working for Cahill and they sponsored me to get into Local 22.

Being a union carpenter means better benefits like retirement, health insurance and a 401(k). If you don’t have a union, there’s going to be a lot of uncertainty about whether you’ll get good benefits or benefits at all. With the union you know it’s there, so that’s a big difference. Before becoming a union laborer and carpenter, I had worked as a non-union painter, so I have that experience for comparison. It’s much better to belong to a union.

We’ve been working on the second floor of the building, doing some trim work for the electricians. We’re placing wood and sheet rock and putting in some openings for the electricians. This KQED remodel is very good, it’s one of the jobs where I’ve been happiest. Everybody works like we’re a group of good friends. We’re all partners in this. It really feels like we’re a team. 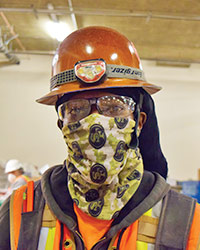 I’ve been with Local 22 for 17 years, joined in 2003. I got into the trade by starting off with CityBuild where I went for a couple months, graduated and then the rest is history. I had found out about the CityBuild program from a few friends who were working in construction at the time. They kept telling me to go and take the class. I like to work with my hands so they thought it would be a good step for me to take, and it was. I’m happy with my decision. I’ve been with Cahill for 15 years.

The union has done an excellent job of taking care of its members over the past 17 years. I can’t complain. I had been going to the union meetings regularly and then got very busy. When I was going, the meetings were very informative and a pretty good way to stay connected. Local 22 really fights for good wages and benefits for their brothers and sisters.

This KQED project is a retrofit and those are always challenging. You never know what you inherited until you start opening stuff up, and then it’s not always what you see in the drawings. There are a lot surprises. 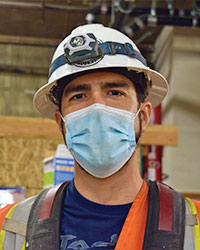 I’m fresh, it hasn’t even been two months into the apprenticeship program. This is my first job as a union carpenter. My father has been a building inspector for AME in San Francisco for 28 years, and he always had good stuff to say about Cahill. I was lucky enough to get in. That’s how I became a union carpenter. I’m enjoying the apprenticeship compared to my previous job, it’s a lot more rewarding and I’m actually learning stuff. People are teaching me things, instead of just having to learn everything myself. I hadn’t done a ton of research about unions prior to joining but I always knew that I’m better off - locking in a better future for myself. I paid my first three months of my union dues, and so far so good, nothing to complain about.

Before I was working on a demolition crew for a private guy and getting paid under the table, doing odd jobs. I learned a little bit of carpentry but not a ton. Here they’re setting me up for success. 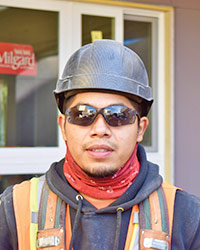 I’m a second-year apprentice. I started out working for Guzman and that’s how I got into the union. I used to work in the restaurant industry and it’s very different going from working in a restaurant to being a union carpenter. Things are going better for me because I’m able to learn a lot by learning from other carpenters. The good wages and benefits have helped me and my family out a lot. Guzman Construction is a good company and I feel fortunate to be working on this project. It’s interesting work.