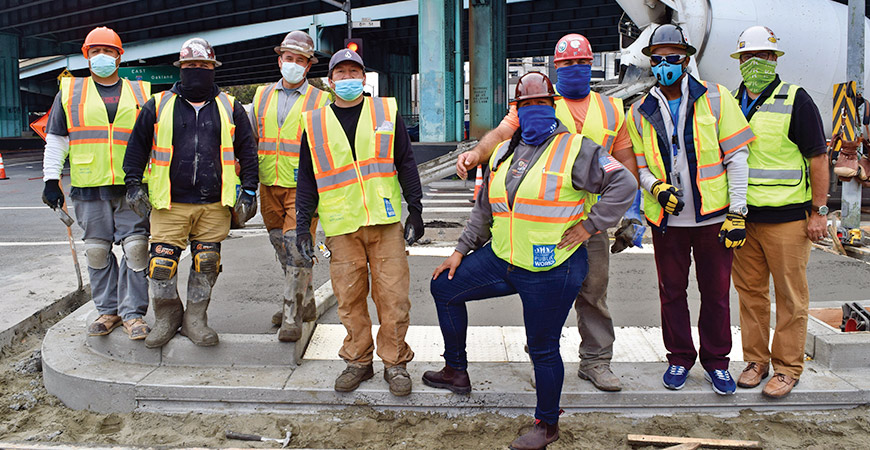 When walking San Francisco’s many neighborhoods, one may only take notice of the sidewalks when they’ve ruptured from years of pressure from tree roots or geologic forces and become hazardous. However the smooth ones that promote safe and easy access for residents are the result of the skills and labor of Local 300 Cement Masons. With a temporary lull in traffic due to the COVID-19 pandemic, crews of Cement Masons have been scattered through the city working on infrastructure projects including roadways, Muni stops, sidewalks and Highway 101.

These projects have become increasingly challenging due to the pandemic’s need for social distancing and added PPE worn on jobsites, which means that fewer workers can gather to tackle any given job. Yet Local 300 members have been busy as ever pouring concrete in all weather conditions and ensuring that every inch of built surfaces are conducive to navigation by all kinds of vehicles and people with varying mobility levels. The City and County of San Francisco has employed Cement Masons in neighborhoods such as SoMa that’s filled with freeway ramps, bus routes and people walking, biking and taking transit, creating many opportunities for accidents. Masons’ work helps keep intersections safer by providing dedicated areas for vehicles, cyclists and pedestrians alike. 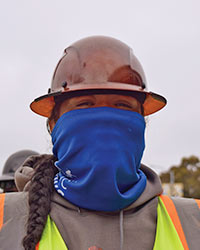 I’ve been a Local 300 Cement Mason for 25 years. Back in the day when I was young 25 years ago, I had just gotten out of jail and I decided to become a Cement Mason Apprentice — I just kept going and never looked back. I’ve been supported us all the way. People should definitely always go union.

My message is that if you’re non-union you definitely need to go union because there’s a whole lot of benefits to having the union support you as far as medical, retirement and just a fair working environment out in the field. You definitely need a business agent to support you because these companies will be shady and have you working out of your job scope and paying you below market rate. So stay focused and do your job and definitely join a union. 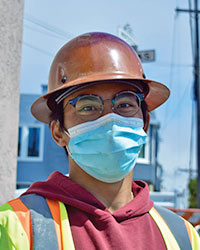 I had met (Business Agent) Dave Johnson at a pre-apprenticeship program at CityBuild academy. I took extra courses with him and he taught me how to do cement and the rest is history. CityBuild was good, you get to learn the basics of construction and get a taste of every trade. I chose cement as a temporary job but I stuck with it because I enjoy my work. I stuck with it because my pay rate was good and I got in with the City and County of San Francisco and have had consistent work. I’ve been with Local 300 for five years and I’ve been working with the City for two years and everything is great.

I would recommend CityBuild to my friends who don’t know anything about construction so they can get a taste of every trade, but not if they already have experience. Living in the city is expensive but being with a union helps a lot because if I’m not working I just go back to the hall and get a call back within one or two days.

Dave Johnson has taken care of me. There’s no hassle or questions when I need something. I feel supported. Dave taught me everything that I know and I continue to learn and build my skills on the jobsites. You have to keep a good attitude and stay positive about what you do. 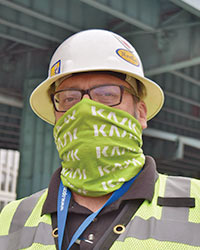 I was in the field for about nine years and then I got this job about eight years ago. I’ve been doing concrete since 2003 with Local 300. I got started doing concrete countertops pre-union and I was pretty good at what I did and I met a guy who told me to come to his company and that’s when I joined the union and started doing decorative concrete.

Being a Local 300 Cement Mason is all about opportunity for the future. I wish I had found out about it sooner and I would have gotten in sooner. It’s the best kept secret. The apprenticeship didn’t cost me a dime. I’m a college graduate, I paid for my own college years ago, then 9/11 happened and the economy went downhill and I had to start over. I found the building trades and the opportunities are just endless.

We’re supporting members during this COVID-19 pandemic and supporting contractors too, because it’s a two way street. Since overall opportunities got cut in half, we’re one of the few opportunities right now, and opportunity is what it’s about. After that it’s what you make of it. 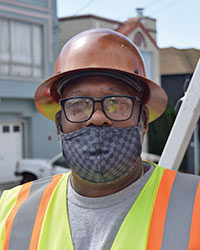 I’ve been with the Local for 22 years. I started out with the Laborers 261. I was a little familiar with unions before I got in. Everything has been okay over the years, they’ve been taking care of me. I’m heading towards retirement now — I’ve got a pension.

We try to keep adequate social distance and you know how hard that is pouring concrete and finishing it. Plus wearing the masks, it’s pretty much those two main things to protect from COVID-19 on the jobsite. It’s everybody’s responsibility but if I see something that’s not being followed I step in and let the workers know. The COVID situation has shortened our shop into a small group of people so they’re asking us to do a lot of work with just four people. Everybody is short handed, so it’s going from maybe ten guys down to four guys. There’s just as many projects going on and so you just got to roll with the punches, everybody has to step up. 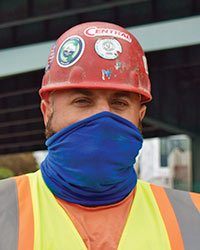 My father was a Cement Mason and my uncle as well as one of my brothers, so it’s in the family. I joined the Local 20 years ago. I used to get dragged out on jobs as a kid so things just ended up this way. The union has treated me really well over the years — anytime you have a problem you just call and they take care of you, it’s pretty good.

Other than making a good living you develop a good work ethic and you get to meet a whole bunch of good people, and there’s always been a lot of work. I’ve never been out of work or on the unemployment list. Because of the pandemic things slowed down for about two weeks and then started going again so it didn’t affect us too much. We’ve been busy. I recommend it to any young people that don’t know what they want to do at first, it’s a good trade to get into and even if you don’t stick with it you’ll have a skill for later on down the road. 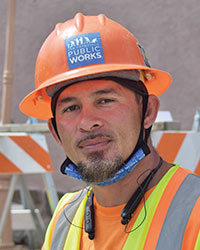 It’s been 21 years that I’ve been with the Union. My father was in Local 300 so I’m second generation. It’s been great. The union has been taking good care of me these past 21 years. I started working for the City a year ago and I love it. It’s steady work and the paychecks are good. I haven’t seen a winter yet, just maybe a couple rainy days.

I’m an active member and also a Union Trustee. Most of the business agents were like family to me, so I look over handling the financials and make sure bills get paid and that everything looks right. COVID has made these things more complicated because we had to catch up on five months worth of financial reports and that was a difficult process that we had to do over Zoom. 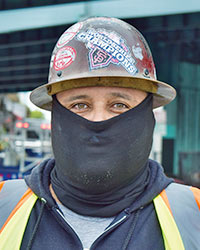 I’ve been a Cement Mason for seven to ten years. I had been a Laborer and then switched to Cement Masons. I was familiar with the benefits of being with unions before I joined so it was an easy decisions for me. Being with a union is way better than being non-union — you get better medical benefits and a pension — that’s why I joined the union.

It’s been a bit hard working during the pandemic but you focus on safety and wearing the gear. At the beginning especially it was hard but it’s getting better. Work has been pretty busy for us. I work for the City everyday and they keep me very busy.