Roofers Local 40 Members Rise to Meet Challenges in the Trade 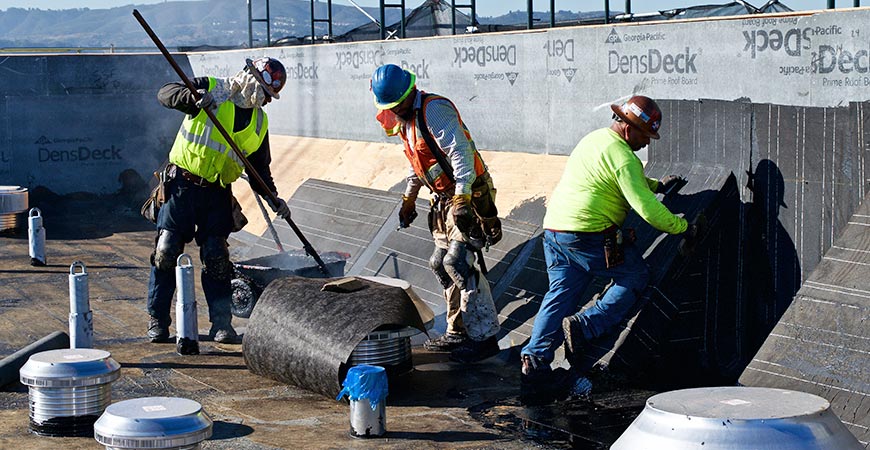 A common misconception about the roofing trade is that crews spend their days perched precariously on the tops of buildings. While this is an essential feature of the job description, roofers can also be found up to 50 feet below street level making sure that structures are protected against water damage. Members of Local 40 who tackle projects in San Francisco and San Mateo Counties have found themselves in a situation where there’s an unrelenting supply of work but a dwindling number of hands to do it, with retirements on the horizon. This has led to roofers adopting a flexible approach, working on multiple job sites in a single day, covering distances from San Francisco’s north side all the way south to Atherton.

A sizable crew of Local 40’s roofers and waterproofers with Lawson Roofing have been working right on the water at Embarcadero piers ensuring that the platforms are impervious to moisture and that possible sources of pollution stay out of the Bay through complex drainage systems. Others with Blues Roofing have been busy stirring the kettle and applying steaming tar to the roof of Cadence Apartments in South San Francisco. Another team worked both above and below ground, getting a South of Market commercial building ready for occupancy. Safety is paramount in the trade where accidents with hot tar can result in third degree burns as well as serious health complications. 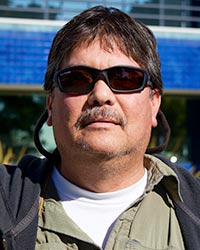 I’ve been with the Local for 34 years. In the past I’ve been a foreman, but right now I do compliance work for our labor management area. I originally got into the trade through a friend who was the apprenticeship teacher years ago. It was my first union experience. I had worked non-union twice prior to joining. After comparing what they had to offer and what the union had to offer, there was no doubt I was going union. You have the chance to look toward the future with retirement and health benefits. I always tell people to go union – don’t go back but move forward toward your future.

It’s a tough trade but a lot of trades are tough. It really takes a toll on the body, it’s a very physical job. I’ve been lucky to work my whole life. Even when it’s raining, I’m working. If you want to work in San Francisco, you’ll always have work.

Stay union, it’s your future. If we don’t support unions, everything will go haywire. We need to stick together so we can preserve our future. 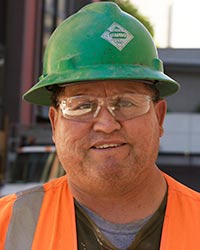 When I joined the union 24 years ago, I wasn’t really thinking about all the benefits. I was just happy to get started working in the trade. But now that I’m looking at retirement, I’m glad to be part of the union because I know my future will be taken care of. I’m looking forward to my pension. The union benefits have always been good for my family.

I started out with Local 40 as an apprentice. Business Manger Jose Padilla was my teacher and also my foreman. We worked together in the same company. Now there aren’t many apprentices. We invite people to come in to start working for the roofers because right now we are too many old people ready to retire with not enough young people coming in. A lot of young people are aiming to work in tech instead of physical jobs like roofing.

I welcome young people to come join the Roofers Local 40. It provides good paying work with good benefits and an opportunity to develop skills that are in demand. 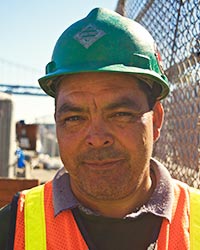 I’ve been with the union for 22 years. I was brand new to the trade but it’s been going well. I started as an apprentice. The apprenticeship program was really good and taught me everything I need to know to be a successful roofer. I always try to make it out to meetings, it’s important. Local 40 is run very well and the leadership always keeps things in order. The union helps you be able to take care of your family thanks to the quality healthcare benefits.

At this job we’re doing waterproofing to the surface of the walkway on the pier. We’re putting a single-ply membrane on it. Comparatively it’s a fairly easy job, but we do have to wear a bulky flotation device while we work as a precaution, but I can swim, so I’m not worried. 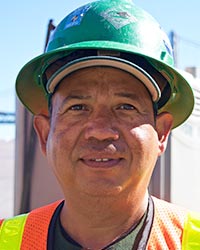 It’s been 23 years for me with Local 40 so I’m one of the many veterans in the trade. My cousin and uncle are with the Local too, so they helped me get started. If you have kids you need health and dental benefits and the union makes sure we’re covered. The union has a lot to offer.

I started as an apprentice back in the day and it was good. The program has changed over the years. Right now less than 30 percent of the roofers are apprentices. There are no apprentices working on this job.

This is a good job because in addition to the waterproofing, we’re building a water collection system that will recycle it and keep it from going back into the Bay and causing contamination. We have to install drain mats and hoses – there are a lot of details to this job. 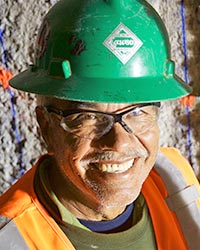 It’s been going very well the past 13 years with Local 40. My son-in-law was the one who got me in the trade. I regularly go to union meetings because I really like participating and feeling like I’m involved. It also gives me the opportunity to discuss the contract, benefits and wages.

It’s very important to be part of a union, especially at my age as I’m 66 years old now. I need good access to healthcare and to be ready for retirement. The union provides that.

I really like the waterproofing job that I’m doing now. It’s also a hard job but I stay in shape for work by playing tennis, which keeps my body in good condition. 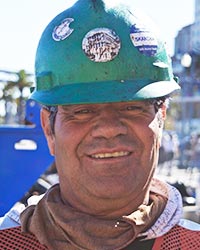 I’ve been a member of Local 40 since 1994. I was working one day and was told by a union rep about the good benefits and pension. I joined and quickly realized how good the benefits are and I’ve had steady work. I also received good training for the type of work we do.
Being part of a union, I can enjoy vacation pay every year, which I take during the rainy season. It’s such a great benefit.
This waterproofing job is going well. It’s fairly average compared to other jobs I’ve done – it’s interesting and not too difficult.