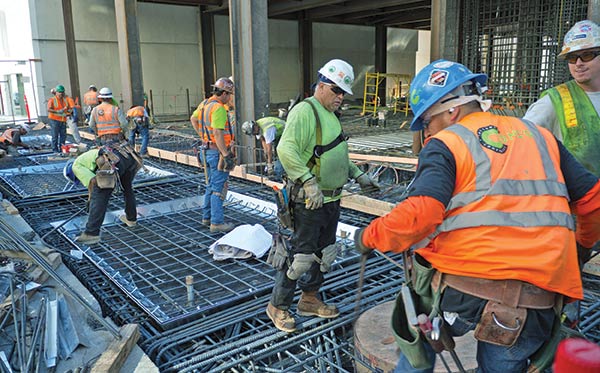 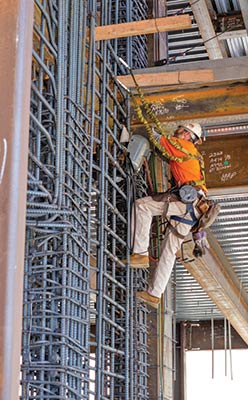 Being an ironworker takes a certain temperament. The men and women of the trade have to be meticulous with safety and the standards that form a building’s structure, but they also need to be flexible with their skills to adapt to the needs of every project. At the end of the day, they’re known for doing what needs to be done.

“That’s what iron workers do, we make it work,” says one of the Iron Workers Local 377 apprentices at 535 Mission Street.

535 Mission Street is a project that crews have been working on for years. It started before the dot com boom but was abandoned during the crash, reverting to a parking lot.

In 2013, Boston Properties bought the property and all the old building materials. Now, a 27 story, 378-foot tall office tower is up out of the ground.

According to Boston Properties, “The building will adhere to the highest standards of environmental design as stipulated by the US Green Building Council. It is one of the first LEED Core & Shell gold pre-certified office towers in SF.” The focus will be on sustainability and efficiency to create a working environment that fosters comfort and productivity. To create an environment of maximum open space, iron plate walls will provide support and earthquake bracing to allow for column-free floor space.

The general contractor is Swinerton Builders. Subcontractors include Herrick Corporation, Pacific Erectors Inc, and Conco Reinforcing. When we visited the site for On the Job Site in September, Local 377 had about 20 workers doing rebar, 18 working doing structural steel, and four working on the deck. The structure had reached seven stories. It is scheduled for completion in the fall of 2014. 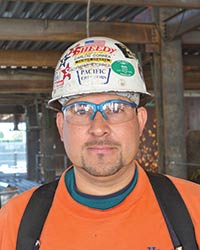 Being a foreman is a lot of responsibility, but it’s fun. You just have to make the job look easy and make sure it’s safe. You have to love the work. If you love what you are doing it’s easy. I try to teach the guys as much as I can. You can see it right away when an apprentice is interested in the job, and that’s when you put in extra effort. We’re cultivating a team. Tajh for example, he’s been with me for a couple weeks and he’s doing a good job. I see a lot of potential in him.

It’s fun because you see how they learn something every day, day after day. Then after a couple months, to see the difference from when they started working, makes me feel good. After a few years you see apprentices turn into journeymen and eventually running jobs. And then when you see them being in charge of big crews, that makes you feel really good. I love being an ironworker and knowing I’m teaching people the trade and passing it on.

The challenge is safety. You have to be conscious 100 percent of the time with apprentices and watch them constantly. It is dangerous work, and we need to make sure they are using all the safety protection equipment.

We love this type of work and want to be able to keep doing it for a long time. 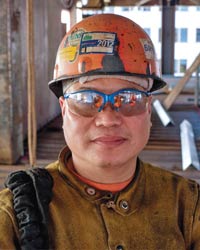 oday I’m welding, but I like doing everything. I’ve worked with these guys a long time. We’re a team.

I used to work in a restaurant, but I wanted to make more money, so a friend helped me become an iron worker. 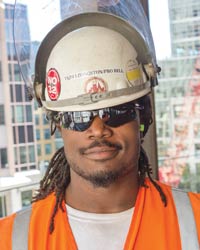 I’ve been an apprentice a year-and-a-half. It’s been really cool going around to all these different places and knowing you’re building the city. Today I’m learning about cutting steel and being safe. You need to make sure you know where everything is around you, and when you shoot the sparks, where they are going to fly so that you don’t hurt anyone or yourself.

My dad was an iron worker, and he got me into the trade. When he first came at me I was 18 and I was a little younger and dumber. I basically told him that I had my life, I had my little car and my little job. I’m so glad I got into it now. It has really paid off.

Now we go to work together on jobs. It’s cool carpooling with my dad. When I was in high school I had no idea I would be doing it, but I’m glad it happened.

Go ironworkers! Keep the pride! And I just hope I can pass the trade on when I have a kid. 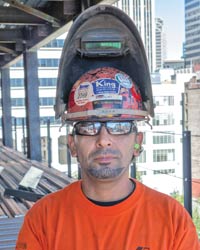 I’ve worked with Carlos for almost 10 years. He’s a great foreman, and now I’m a foreman too. We go to committee meetings every morning, discuss what we are going to do.

I started working with Carlos as an apprentice, and he’s taught me a lot of things. He taught me that if I work hard I will stay busy and keep working and not get laid off. He taught me how to work safely by using safety gear. When the work slows down, they keep the foreman, so it’s a good thing to be a foreman. It’s challenging, but you get to work everywhere, with different people, and you can even work on Saturdays.

Today I’m spreading decking. I like doing decking, You just put it down and shoot in the studs with a gun, push down the barrel, and go go go. 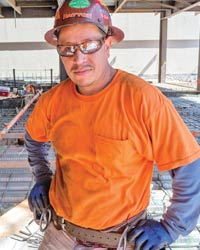 I’m a rebar guy. I love doing rebar. I’ve been doing it ever since I started as an apprentice four years ago, and I’m going to turn out in March. It’s physical. There’s no need to go to the gym after work.

Every day is different. One day you do walls, the next day foundation, the next day you’re doing cables. Today we’re doing this ramp and a valve cover for PG&E. Building walls is my favorite. It’s like rock climbing.

My dad was a foreman here and he took me along to watch a couple times. As soon as I was 18, I started working.Building a wall, you just start from the bottom and work all the way up, tied-off all the time. Be safe and keep others safe, and do your best. 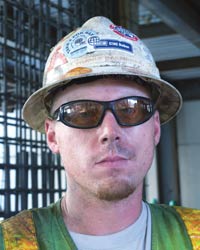 Today we’re building a nice little slab on the sidewalk here on 535 Mission Street. The bars are prefab, but sometimes we need to cut them to make it work. That’s what ironworkers do; they make it work. We take a lot of pride in what we do. I like the challenge of working with steel. It takes a lot of skill. It’s unforgiving, unlike wood.

We have a good crew of guys. We’re like a big family, teamwork and communication. If you don’t communicate you’re not part of the team and you’re not going to get stuff done. There is a little bit of a language barrier sometimes, but you get so used to the guys in your crew you can pick up on what their next step will be without even talking to them. That’s how tight knit we are. It makes for some interesting days sometimes with all the different languages, but we get the job done and we go home safe.

It’s a rough trade, but it pays the bills. I take a lot of pride in seeing the buildings I built. Not everyone can do this.

You learn as you go and learn to work safe and go home safe. My stepfather was an iron worker. It’s a family thing.