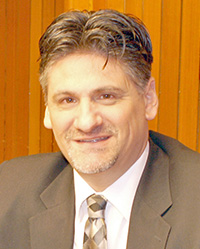 Larry Mazzola Jr. took over as president of the San Francisco Building and Construction Trades Council in 2015, replacing his father and longtime labor leader Larry Mazzola Sr. Mazzola Jr. has served as Business Manager/ Financial Secretary Treasurer for Plumbers Local 38, as a delegate to the Trades Council for more than 20 years and brings a wealth of trades knowledge to the table. With his tenacity and determination for progress, he carries on the proud tradition of fighting for working men and women in San Francisco. 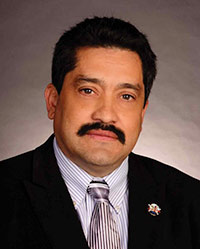 Hernandez has been a member of the Laborers’ International Union Local 261 since 1986 and has worked extensively in the construction industry. He was first elected by his peers at Local 261 to represent them as auditor in 1999 and went on to serve the union as vice-president and president. He was elected business manager by unanimous vote and has been re-elected twice since.

Hernandez, who has earned a reputation for keeping the bar high at Local 261, can be seen throughout the many diverse neighborhoods of San Francisco consulting with workers on jobsites, joining them on picket lines, and helping them organize. He can also be found in the halls of state and local power, where he advocates for legislation and policy decisions that are favorable to labor and assists candidates who act in the interests of working people.

No matter where he goes, Hernandez's core commitment is always to plug union members into the organizing and political efforts that can improve their lives both on and off the job. 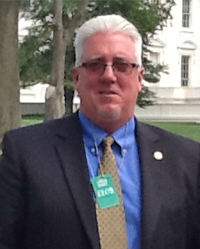 Born and raised in San Francisco, John is a first generation Irish-American and holds a sociology degree from UC Santa Barbara. His career in the electrical industry began in October of 1998. Since that time he has been an active member of his local, and has served the membership as a teacher at the Apprenticeship School, as a Business Representative, as President, and currently Business Manager-Financial Secretary of IBEW Local 6. He serves as a Trustee for Local 6’s Apprenticeship Committee, its Health and Welfare Plan, and its Pension Plan. John has served as a delegate to the San Francisco Building and Construction Trades Council since December of 2007; first as a delegate to the Board of Business Representatives, and then as a delegate to the full Council. “As a member of the Building Trades, and a student of its past accomplishments, I will work to continue the proud traditions that have led to our many gains,” says Doherty. 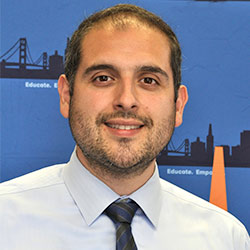 Gonzalez, who has made a career of organizing workers and fiercely negotiating on their behalf, came to the SF Building Trades from the San Francisco Labor Council. He became the SFLC’s Interim Executive Director in May 2018, and only three months later, SFLC delegates unanimously nominated and elected him to a two-year term as Director. Gonzalez became the first person of color and youngest person elected in the 125-year history of the SFLC.

Gonzalez was a card-carrying Teamster by age 18, and he cut his organizing teeth in the not-so-Union-friendly U.S. South, where he learned firsthand about the challenges of helping workers unionize. Upon his return to Northern California, he became Business Representative and Organizer for Teamsters 856 and began negotiating private- and public-sector contracts. Gonzalez rose to the rank of Director, was elected twice as Vice President, and led organizing campaigns that nearly doubled the size and strength of the local before he headed to the SFLC.

Informed by his Catholic upbringing's social justice doctrine and motivated by a sense of stewardship instilled by his father’s lifelong career as a firefighter, Gonzalez finds purpose in building power for workers.