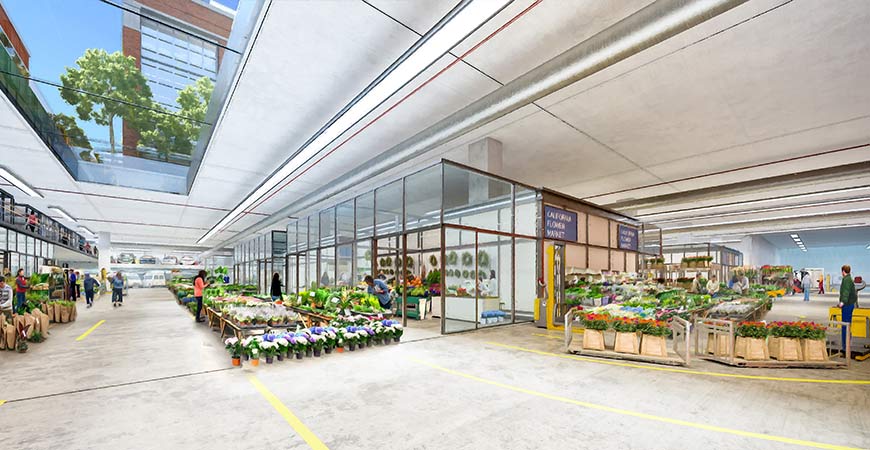 Kilroy Realty announced its plans for the Flower Mart site earlier this year. If everything goes as planned, construction will begin in 2017 and completed by the end of 2019. - Rendering Courtesy Kilroy Realty

The redevelopment of the San Francisco Flower Mart at Sixth and Brannan streets will move forward now that the owner of the market and the market’s tenants have reached an agreement that satisfies the concerns of both the tenants and the opponents of the project.

Kilroy Realty Corporation, the San Francisco Flower Mart LLC (SFFM), and a group of flower vendors organized as the San Francisco Flower Mart Tenants Association announced the agreement at a press conference on June 29. With the deal, an initiative campaign led by former San Francisco Mayor Art Agnos and former San Francsico Supervisor Aaron Peskin to force the project to win voter approval in the November election was withdrawn. Opponents of the redevelopment and the height of the proposed offices at the site had gathered close to 20,000 signatures to qualify the initiative.

“Saving the Flower Mart means that these locally-owned businesses will be able to continue to call this their home for generations to come.”

Earlier this year when Kilroy Realty announced its plans for the site, Flower Mart tenants expressed concerns about potential increases in rents and wanted guarantees that their businesses wouldn’t be impacted by the construction. Kilroy first purchased part of the Flower Mart property in 2013, then followed that up by acquiring the former San Francisco Flower Growers Association property within the site in October of 2014. The developer said they would work with tenants to address their concerns.

Kilroy Realty Vice President Mike Grisso said the company “has been committed to saving the Flower Mart from the beginning, and these negotiations have brought us closer to ensuring the project becomes a reality. We appreciate everyone who has taken an interest in working with us to preserve this important resource for all of San Francisco.”

Grisso added that the “tri-party agreement between Kilroy Realty, the SFFM and the Tenants Association is a continuation of the commitment to work with the tenants.” Grisso also noted that the tenants would vote on whether a new wholesale warehouse would be built below ground or above ground.

Under the terms of the agreement, the existing tenants will be guaranteed affordable rents in the new flower market. The agreement also includes terms of a move to a temporary location – still to be determined – within San Francisco while the new flower market is under construction. Kilroy Realty will hold regular meetings with the tenants on the design of the project and SFFM will create a new board of directors to manage the operation of the Flower Mart, with three seats reserved for tenants. In return, the Tenants Association and its advisors have agreed to halt the ballot initiative that had been filed to challenge the project.

Several flower vendors spoke in support of the agreement at the June 29 press conference at the Flower Mart.

“Through hard negotiations, we have come to an agreement that continues the future of the flower market with rents that are affordable to our industry,” said Louie Figone, owner and operator of Figone Nursery, a San Francisco Flower Mart tenant since 1967.

Rob Shibata, the owner and operator of Mt. Eden Floral Co., a San Francisco Flower Mart tenant for over 100 years, said he had been concerned about the long-term survival of the market but was pleased with the agreement.

“Kilroy has made a substantial financial commitment that will allow the wholesale flower industry to remain in San Francisco for a long time,” Shibata said.

The new facility will have 115,000 square feet of wholesale warehouse space, 10,000 square feet of retail space for the flower vendors, 20,000 square feet of neighborhood retail space, 1.5 million square feet of office space above the new retail space and the new wholesale flower market, and a one acre public plaza. With the threat of a ballot measure off the table, Kilroy Realty is moving ahead with gaining approvals so construction can begin in early 2017; the project would be completed by the end of 2019. Grisso said Kilroy Realty hasn’t chosen a general contractor or construction manager yet, but told Organized Labor that the company “always” uses union contractors. Kilroy Realty has several projects underway in San Francisco, including 350 Mission and 333 Brannan in the South of Market neighborhood, and 1700 Owens in Mission Bay.

Kilroy Realty’s Executive Vice President for Northern California, Mike Sanford, said the company is working with a Tenant Project Committee to work through the design elements of the Flower Mart that would best suit the existing tenants’ needs.

“We envision the new San Francisco Flower Mart to be a real destination – a mixed-use development where flower vendors, retail tenants, office users, and visitors mingle together to create a unique, organic environment that complements all of the varied uses on the site,” Sanford said.

District 6 Supervisor Jane Kim said it was important to keep local businesses engaged in production, distribution and manufacturing in the South of Market area. She said the agreement on the project ensures that “we don’t lose any square feet of PDR [Production/Distribution/Repair]” and noted that the project “will encompass PDR and offices – combining history and the future.” Kim commented that, “Tech is not the only creative class in San Francisco.”

Kim added that she had visited many of the vendors at the site and heard their stories.

“Saving the Flower Mart means that these locally-owned businesses will be able to continue to call this their home for generations to come,” she said. “I want to thank all of the parties who have worked hard these past months to get the agreement completed, including the Tenants Association and Kilroy Realty. I’m thrilled to celebrate with them and the thousands of living wage workers whose livelihoods depended on reaching this agreement.”